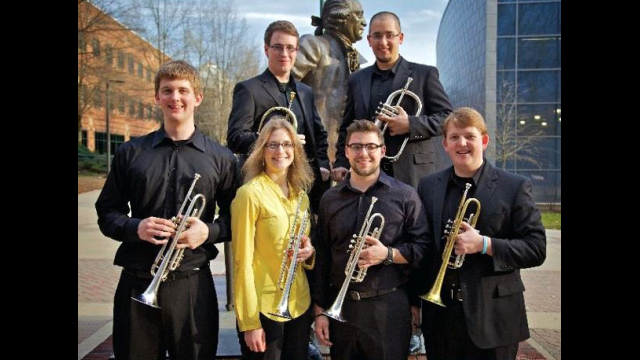 March Madness for Trumpets -- aka, the National Trumpet Competition at George Mason University in Fairfax, Va. -- took place over spring break and "once again, our trumpet studio represented Baylor famously," said William May, Ph.D., Dean of the School of Music at Baylor University.

Baylor Gold finished in third place behind Northwestern University and the Juilliard School. Since 2009, four of five Baylor ensembles have placed first, third, four and fifth in the national contest, he said.

"Six schools were recognized as winners, and each is recognized as among the largest and finest music schools in the nation -- terrific company, to be sure," said May. Besides Baylor, Northwestern and Juilliard, other winners were Indiana University, in fourth place; and Florida State University and the University of California in Los Angeles, with both earning honorable mention.

Of the 53 entries in the Ensemble Division allowed into the competition by taped audition, 30 advanced to the finals, including two ensembles from Baylor --the Gold and the Green.

In the undergraduate division, 39 advanced to the semi-finals, including Brinkman, Hauser, Dunham and Gerona.

Rudd arranged Baylor Gold's composition specifically for this competition, performed as a featured soloist in the opening concert with The U.S. Army "Pershing's Own" Concert Band and in a concert with his touring ensemble Rhythm & Brass. He also presented a career development clinic.

May commended Rudd and Mark Schubert, adjunct lecturer, for the "fine teaching they do every day."