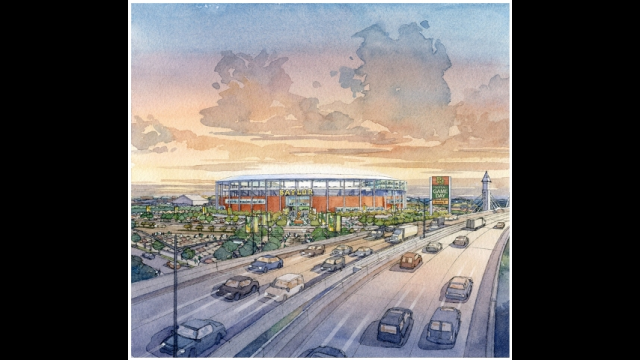 Artist's conceptual drawing of the view of Baylor Stadium from Interstate 35 across the Brazos River from the Baylor University campus.
Tweet
March 13, 2012

WACO, Texas (March 13, 2012) - Baylor University's Board of Regents announced today that the university has received a leadership gift - the largest capital gift in university history - from Elizabeth and Drayton McLane Jr. for Baylor's new on-campus football stadium alongside the Brazos River. With this naming rights gift, the McLane family asked that the new football facility be named Baylor Stadium. The generous gift will lead on-going fundraising to support stadium construction.

"We are fortunate to be a family that includes a number of proud Baylor University alumni," said Drayton McLane Jr., a 1958 Baylor graduate. "We believe strongly in the University's distinct and important role as a Christian institution dedicated to academic excellence at the highest level. Our son Drayton III, a 1996 graduate of Baylor, and his wife Amy, and their sons Drayton IV, Brooks and Walker, as well as our son Denton, who graduated from Baylor in 1999, and his wife Amy, and sons Jeff and Jake, join us in joyfully making this gift to Baylor. As a family, we wanted to do something that would shine a light on the University we love, while enhancing student life at Baylor and impacting positively the city of Waco and Central Texas. This is an incredible time to be a Baylor Bear and all the McLane family is excited to part of the momentum that is leading Baylor to new heights."

"Throughout our 167-year history, at what we now recognize as signature moments, visionary leaders have stepped out boldly to help propel Baylor and advance important University objectives," said Baylor President Ken Starr. "We recognize that we are living in a remarkable time in the history of Baylor athletics, and we are blessed to have loyal, courageous and generous friends in Elizabeth and Drayton McLane, and their family, who have stepped forward to encourage all of us to take hold of a rare opportunity for our football program. Their significant leadership gift will secure Baylor's position among the nation's elite collegiate athletics programs, while providing our alumni, students and student-athletes a game day experience like none other in Baylor history. As a Baylor alumnus, Drayton has consistently demonstrated his profound love and support for Baylor through his distinguished service as a Regent and as chairman of the board. Previous expressions of generosity by the McLane family have impacted virtually every aspect of university life. We are humbled by this most recent gift which will create an important campus life tradition for our students and benefit all of Baylor Nation for generations to come."

The new on-campus Baylor Stadium is expected to be built on a 93-acre site on Interstate 35, one of the nation's busiest highways, traversed by more than 42 million drivers annually. The stadium will hold 45,000 spectators, with the flexibility to expand to 55,000 in the future. It also will feature a bridge crossing the Brazos River and connecting the stadium to the campus, canopy shading for half of all seats throughout the day, open concourses with views directly into the stadium, suites, loge boxes, indoor and outdoor club seating, designated seating for Baylor students and the Baylor band, and an event center and Stadium Club for year-round use.

"We are extremely grateful, humbled and honored by the McLane family's generous lead gift for the new on-campus Baylor football stadium," said Bears' head football coach Art Briles. "Their love and passion for Baylor is truly incredible, and this gift will impact not only Baylor football, but our great University, well into the future. The vision shown by both the McLane family and our University leadership will ensure continued success for our football program. I look forward to leading the Bears out of the tunnel and onto the field of the new Baylor Stadium."

Baylor's Director of Athletics Ian McCaw also expressed his appreciation. "We are deeply indebted to Drayton McLane and his family for this generous leadership gift. Drayton's vision and passion to develop a state-of-the-art, on-campus football stadium at Baylor will have a powerful and lasting impact on the football program, the University, Waco and Central Texas," McCaw said.

The Baylor football team under Coach Briles completed a record-setting year in 2011, finishing 10-3 and No. 12 in the final ESPN/USA Today coaches' poll and 13th in the AP poll, the highest final rankings since 1986. Baylor's Valero Alamo Bowl championship team set or tied 129 school records, while Baylor quarterback Robert Griffin III won the Heisman Trophy, the most prestigious award in college football presented to the nation's best player.

Baylor football has been a mainstay on the Texas collegiate football landscape having played its first football game in 1899 at Carroll Field, an on-campus field adjacent to the university's academic buildings. Baylor played the majority of its home football games on campus until 1936, when it moved into the newly built Waco Stadium, where it played through the 1949 season. In 1950, the Bears moved into the new 50,000-seat Baylor Stadium, later named Floyd Casey Stadium, about four miles from campus, and has played there ever since.

With a successful spring fundraising campaign, the stadium project could be completed in time for the first game in fall 2014.