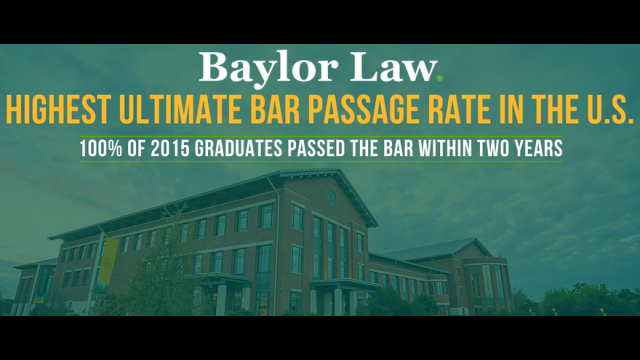 WACO, Texas (April 3, 2018) – One-hundred percent of Baylor Law’s 2015 graduates passed the bar exam within two years of graduation, the highest rate of all 204 ABA-approved law schools, according to the Managing Director’s Office of the ABA Section of Legal Education and Admissions to the Bar. The ABA released its data on first-time passage rates on March 22, and for the first time, “ultimate” passage rates for those students who passed within two years of graduation.

“We are so pleased and proud of these results. This ultimate bar passage rate underscores, once again, the remarkable commitment of Baylor Law’s faculty and staff to educate and train our students as they prepare to serve in the legal profession. They have a genuine interest in seeing each student succeed. We also are thankful for our university administration, which is enthusiastically supportive of Baylor Law,” Toben said.

The news comes on the heels of the announcement that Baylor Law climbed into the Top-50 in the U.S. News & World Report “Best Law Schools” list for 2019.

Baylor Law’s renowned Trial Advocacy program ranks among the best programs in the country, leading to an unsurpassed record of success on the State bar exam, which is given twice a year, in February and July, and qualifies a candidate to practice law in Texas.

At Baylor Law, students receive comprehensive training on all aspects of the law, including theoretical analysis, practical application, legal writing, advocacy, ethics, and negotiation and counseling skills. This rigorous training ensures that students not only pass the bar, but are ready to practice law upon graduation. Every third-year Baylor Law student must complete Practice Court — a two-quarter, four-course, real-world training ground — that tests their legal acumen and hones their critical thinking, analytical precision, and written and oral advocacy skills. Having earned the moniker of “the Marine Corps boot camp of law schools,” in just over six months, students try multiple court cases from beginning to end — from pre-trial preparation of filing petitions and answers, arguing motions, taking depositions and gathering evidence — to crafting opening statements, examining witnesses, selecting juries and delivering closing arguments.

Established in 1857, Baylor Law was one of the first law schools in Texas and one of the first west of the Mississippi River. Today, the school has more than 7,400 living alumni. It is accredited by the American Bar Association and is a member of the Association of American Law Schools. Baylor Law has a record of producing outstanding lawyers, many of whom decide upon a career in public service. Baylor Law boasts two governors, members or former members of the U.S. House of Representatives and the U.S. Senate, two former directors of the FBI, U.S. ambassadors, federal judges, justices of the Texas Supreme Court and members of the Texas Legislature among its notable alumni. In its law specialties rankings, U.S. News & World Report ranked Baylor Law’s trial advocacy program as one of the top 5 in the nation. Baylor Law School also is ranked No. 50 in the magazine’s 2019 edition of “America’s Best Graduate Schools.” The National Jurist ranks Baylor Law as one of the “Best School for Practical Training” and No. 4 in the nation in its most recent “Best Law School Facilities” listing. The Business Insider places Baylor Law among the top 50 law schools in the nation. Baylor Law School received the 2015 American Bar Association Pro Bono Publico Award, making it only the third law school in the nation to be honored with the award since the award's inception in 1984. Learn more at baylor.edu/law.