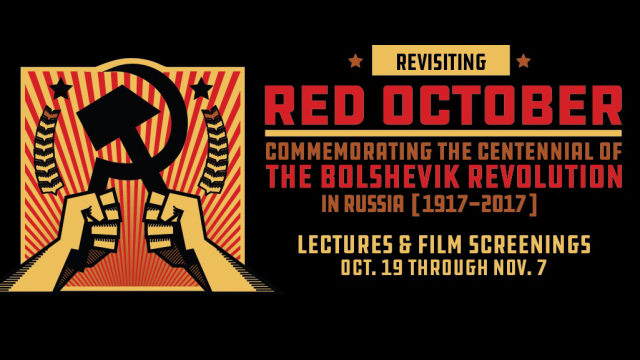 WACO, Texas (Oct. 23, 2017) – Baylor University will host a series of academic lectures and film screenings - sponsored by the Keston Center for Religion, Politics and Society, Department of Modern Languages and Cultures, Department of History, McBride Center for International Business, International Studies and Armstrong Browning Library - that look back at the world-transforming events that took place 100 years ago during the Russian Revolution.

“During the Cold War, this was easy to understand because of the presence of the Soviet Union and its satellites. The end of that conflict and the collapse of the USSR has challenged us to rethink the revolution’s meaning in interesting ways. The centennial is a great opportunity to provide the Baylor community with a number of perspectives on this question,” deGraffenried said.

Baylor is home to the Keston Center for Religion, Politics and Society, which holds the Keston Archives and Library, the world’s most comprehensive collection of materials on religious persecution under Communist and other totalitarian regimes. The Center’s mission is to promote research and encourage the study of religion under these oppressive societies.

Alongside these lectures, a series of Russian films centered around the Russian Revolution will be screened from Oct. 19 through Nov. 7. The first three film screenings will be hosted by Dr. deGraffenried, while the fourth and final will be hosted by Dr. Michael Long, Dr. Harris and Dr. Steven Jug, as part of the Department of Modern Languages and Cultures’ popular World Cinema Series.

In October 1917, the Bolshevik Revolution toppled the provisional government that ruled Russia following the abdication of Emperor Nicholas II earlier that year. The revolution paved the way for the rapid development of the United Soviet Socialist Republics (USSR) under a Communist government and changed the course of human history. The lectures and films featured as Baylor revisits Red October are designed to explore the political and social dynamics at work in Russia during this tumultuous era.

”The Russian Revolution spans multiple academic disciplines, from history to modern language and cultures to religion and philosophy to international studies and, of course, to the Keston Center, which houses materials documenting religious persecution during the Communist era,” said Kathy Hillman, associate professor and director of the Keston Center. “The partners have worked together to create an exceptional series of events and are eager to engage the Baylor community in conversation about this significant period that continues to impact our world.”

For more information, visit the Baylor Libraries website at www.baylor.edu/library/.