Lori Baker, Ph.D., associate professor of anthropology, who was featured on the National Geographic Channel series, The Decrypters, has worked for the past 10 years with her team of forensic anthropology students exhuming the remain of immigrants that died while crossing the U.S.-Mexico border. For the past few summers, Baker and her team work in cemeteries in Brooks County, Texas exhuming remains and maintain a repository of more than 100 bodies. Baker and the students conduct anthropological tests and conduct DNA analysis in an effort identify the unknown and repatriate their remains to their families. Baker, founder and executive director of the Reuniting Families Project, has formed a consortium with other institutions to aid the identification work. The identification work and ultimately reuniting families are paramount to Baker. “We love them. We think of them as people. We treat them with respect. We remember where they come from. And, we remember that everyone is associated with a family somewhere that is grieving,” Baker said in a recent television interview. 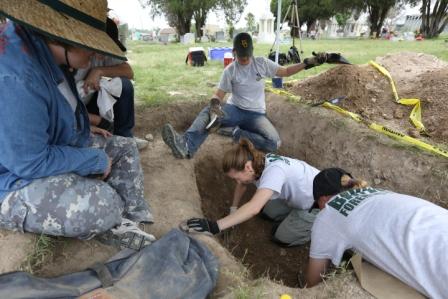 Nov. 14, 2005, New Collaboration Between Baylor and Mexican Government to Identify Immigrants' Remains to Be Discussed at News Conference

• Scientific American, June 18: The Forensics of Identifying Migrants Who Die Exhausted after Crossing from Mexico

• Vice, Dec. 16: Dead Migrants Are Vanishing at the Texas Border

• Texas Public Radio, Aug. 4: Students Toil In Texas To Give Names And Burials To Migrants (AUDIO)

• NPR Here & Now, Aug. 4: Students Toil In Texas To Give Names And Burials To Migrants (VIDEO)

• KUT-FM, July 15: Death on the Border: Trying to Identify the Youth Who Never Made It

• ABC This Week with George Stephanopoulos, June 15, 2014: Children of the Border (VIDEO)