Harry Ballinger (1892-1993), who hailed from the East Coast, studied at the University of California, San Francisco, The Art Students League (with Harvey Dunn) and the Academy Colarossi in Paris. Not only was Ballinger a watercolorist, but he also was an author and illustrator for many magazines like Painting Surf and Sea (1966), Landscapes (1965) and Painting Boats and Harbors (1959). He was a member of the Allied Artists Association, Audubon Artists, American Watercolor Society, New Haven Paint and Clay and Kent Art Association. His paintings are in several museum and university collections as well as many private collections. 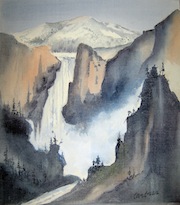 Cecilia Cardman (1906-d.?) was born in Soveria Mannelli, Italy, and earned her BFA degree from the University of Colorado and then returned to Italy to study at the Instituto di Belli Arte of Naples. She was a student of Milford Zornes, and Edgar Whitney, and a member of several prestigious art organizations such as the Salmagundi Club and Allied Artists of America.

Virginia Cobb is a successful artist and author. As an artist she has exhibited throughout the US, Canada and Britain and is a member of the National Academy of Design and a dolphin fellow of the American Watercolor Society. As an author, she has written Discovering the Inner Eye, Experiments in Water Media, and co-authored another book with Polly Hammett who is also included in the collection.

Don Dennis (1923-2005) was born in Reading, PA. After being a Marine in World War II, Dennis got his degree from Kutztown University in art education and later went on to Pratt Institute. Despite his successful career as a corporate art director, he decided after spending time under the tutelage of Edgar Whitney and Barse Miller to become a painter full-time and teach workshops on his own. He would say that focusing on his work let him " transcribe his "mind's eye" and create spontaneous, energetic and dynamic watercolors". Dennis was a part of many art societies, groups and organizations. Most notably he was the Midwest vice-president for the American Watercolor Society and a founding member of the Ohio Watercolor Society.

Gene Hartsell was a native of Oklahoma and it was the landscape of his home state that influenced his art. He was well known in the southwest for his watercolor landscapes and rural scenes.

Robert Higgs (1944-) studied in Kansas City and then at Chicago Academy of Fine Arts, where he studied with Ruty Van Schyle Fort and became a watercolorist. While there he also studied with Edgar Whitney, Elliott O'Hara and more. After World War II, Higgs became the Art Director of Joplin Printing Company.

Elizabeth Ryan was a winner of numerous awards in major national exhibitions. Her works have been shown at museums, colleges, and art galleries throughout the U.S. She is represented in the permanent collection of Virginia State College and in private collections throughout the US Europe, Panama, Japan, South Africa and Canada. She has memberships in the American Watercolor Society, Allied Artists of America, and the Salmagundi Club.

Marie Kaneko Shaughnessy's studies focused on Oriental Style Painting, and she is currently a member of the Sumi-e Society of America. She studied under several noted artists who are also included in the collection such as Edgar A. Whitney, Millard Sheets, Charles Reid, and George Post. Shaughnessy is also a member of the prestigious American Watercolor Society.

Zoltan Szabo (1928-2003) born in Belapatfalva, Hungary, Szabo studied art in Europe but later traveled to Canada where he continued his career as a designer. Szabo has authored several books dealing with watercolor techniques and issues, and is represented in galleries and collections internationally