Marion Andrews was born in Norton, MA and has been an active watercolorist since the 1950's. She studied at Worcester Museum of Art School, MA College of Art, Boston, B.S.; Pratt Institute, Art Students League and others. She was also a pupil of Edgar Whitney, Rex Brandt, Donald Jackson and Frank Webb. She has exhibited with the American Watercolor Society and many others. Marion also taught watercolor at the Jackson Heights Art Club as well as many workshops through the Eastern Shore Community College. 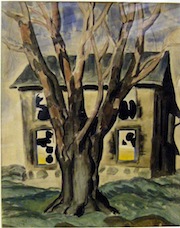 Charles Burchfield (1893-1967) was a pioneer of American regionalism, touched with a hint of the fantastic. An Ohio native, he painted his surroundings and those of the upper Midwest. Burchfield received numerous awards and honors during his lifetime for his paintings, and was even given honorary degrees from Harvard and Hamilton College. He was highlighted in galleries and shows across American and also found time to pursue a successful teaching career.

Claude Croney (1926-1993), a native of New York City, gained clout as a watercolorist and was exhibited at The National Academy, Allied Artists, and the American Watercolor Society. In addition to painting, Croney also taught classes on painting and wrote a successful book titled My Way with Watercolor.

Rita Duis was a New York City area artist who was affiliated with the Salmagundi Club where there is a memorial award in her name.

Arne Lindmark (1929- ) is a watercolorist from New York. He not only was an artist, but a teacher as well. He taught many watercolor workshops all over the United States as well as private lessons and demonstrations. He was a winner of many national awards. Lindmark is also a member of many societies such as the American Watercolor Society and the Hudson Valley Art Association.

Ray Loos (d. 1996) began his career as a full time painter in 1965 with the encouragement of his friend and teacher Edgar Whitney. Since then, he taught watercolor classes throughout the nation and earned the title "Fastest Brush in the East" due to the speed in which he could paint full sheet demonstrations.

John Marin (1870-1953) showed interest in art at a young age, but it was not until he was 29 and already failed at a career in architecture did he turn wholly to art. He studied in Pennsylvania, New York, and then Paris. It was in Paris that he met an influential American photographer and gallery representative that took a keen interest in Marin's work. The art world embraced Marin's daring style with watercolor and today he is remembered as one of America's greatest watercolorists.

Carl Molno is best known as an advertising and freelance illustrator, but he is also a well-known painter in both the watercolor and oil medium. He has been featured in exhibits by the American Watercolor Society, Allied Artists of America, the National Academy, and the National Arts Club. He taught watercolor classes as well as summer workshops across the country, including Texas.

August Napoli (1934-1994) studied at the School of Visual Arts with Edgar Whitney, and he is represented throughout the United States in various galleries and collections. As well as being a prolific painter, Napoli was also an illustrator and worked out of his studio in Staten Island, NY. He became acquainted with Faber McMullen on a trip to Jamaica, where this particular work was painted.

Eliot O'Hara (1890-1969) was a distinguished watercolorist in his time. O'Hara didn't receive any formal teaching, but taught himself how to paint when his father passed away suddenly at the age of twenty-two years old. He developed his skills throughout the years and over a honeymoon trip in Europe, but that didn't stop him from a successful career and sell out shows. He received many awards throughout his distinguished career such as the Guggenheim Fellowship, a lifetime membership in the American Watercolor Society and was elected as one of the first watercolorists to the National Academy of Design. Along with his honors O'Hara ran a watercolor school, wrote eight books, taught numerous classes and made more than twenty films on watercolor techniques. 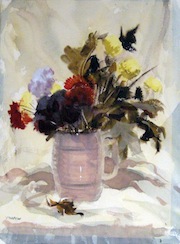 John Pellew (1903-1993) was born in England and became well known for his watercolors. He won several prestigious awards throughout his career from organizations such as The American Watercolor Society and Allied Arts of America. He worked as an instructor in New England and wrote three books on painting. Pellew was a member of the National Academy of Design, The Salmagundi Club, Allied Artists of America and the American Watercolor Society.

Carlton Plummer was born in Maine in 1929. He attended Vesper George School of Art in Boston pursuing a major in illustration. He was drafted in World War II and his education was put on hold for two years. While in the service his artistic talents helped him get a position in 'Special Services' painting murals and designing posters. After his service he enrolled at Massachusetts College of Art. Later on in life he became professor at Lowell State College, which later became University of Massachusetts. He also taught hundreds of workshops around the world. Plummer also was the recipient of more than 250 national and international awards. 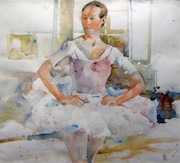 Charles Reid (1937-) was born in Cambridge, MA and received his education at the University of Vermont and the Arts Student league in New York. He is a member of the National Academy and the National Watercolor Society where he has won numerous awards. Reid has authored eight books on the subject of watercolor painting. 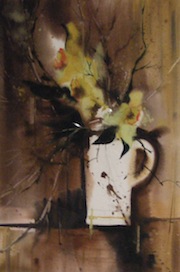 Joan Rudman (1927-) received her MA from Michigan State University and studied at the Art Students League of New York, with Edgar A. Whitney and Charles Reid. She is president of the Hudson Valley Art Association. She authored a chapter in How to Paint Watercolor the Edgar A. Whitney Way and wrote Places in Watercolor. Joan was recently chosen to exhibit her work in the prestigious 138th Annual International Exhibition of the American Watercolor Society.

Frank Webb (1927-) currently serves as Vice President of Signature Membership of the American Watercolor Society, and he himself has been awarded a Dolphin Fellowship through the AWS. He is also a member of the National Watercolor Society, Allied Artists of America, among others. He has received more that 90 major awards and published 3 books on painting and design. 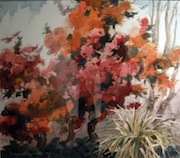 Frederic Whitaker (1891-1980) won more than 150 awards for his representational watercolors. He was an Academician in the National Academy of Design. He served as president of the American Watercolor Society from 1949-1956, and in 1943, he organized Audubon Artists, Inc., an art society designed to represent all voices in the visual arts. He served as officer/board member of numerous other national and regional art societies.

Edgar A. Whitney (1891-1987) is one of the most well represented artists in the collection, and a dear friend of Dr. and Mrs. McMullen. He was first a painter, and second a teacher, and he would conduct painting workshops throughout the US. He lectured at the Pratt Institute, NYU, and the Colombia Graduates Club. Several artists in the collection cite Edgar Whitney as one of their most influential teachers.