Many of the artists included in the collection are local Texas artists. In 1975, Houston artists including Dr. McMullen founded the Watercolor Art Society-Houston which served as a conduit for local area artists to gain valuable exposure, as well as a venue for watercolor classes and workshops. Dr. McMullen was a well-known figure in the Houston area watercolor scene, and several of the Texas artists in the collection were members of the WASH.

Bud Biggs (1906-1985) studied art the Pratt Institute and was a watercolor teacher for thirty years as well as a successful commercial artist in Dallas, Texas

Margaret Bock lives and works in Houston, Texas. She started painting in her 40's as a hobby, having previously had a career as a dancer. At the beginning of her career, she had a hard time finding a good watercolor teacher since she was moving with her husband for his career; until she came to Houston where she found the beginnings of the Watercolor Society Houston (WAS-H). Throughout the years Margaret has stayed true to her art as well as WAS-H. She has held almost every position on WASH's Board of Directors, including being President twice. Bock has brought WASH to its place of prominence and recognition that it holds among societies through her hard work, love of watercolor, and dedication. Margaret Bock is an Elite Signature Member of WASH and an Honorary Member of the Society. Her work has been shown in Archway Gallery several times.

Melba Dudley was a watercolor artist who lived and worked in Houston, TX. Dudley served on the first administrative committee to help structure and organize WAS-H in its fledgling years. At the same time, Faber McMullen was serving on another committee within WAS-H.

Ramon Froman (1908-1980) was born in Louise, Texas. He went to Chicago to study art under teachers, such as, Emden Amburgh and Charles Schroeder, who were a profound influence in his life and helped him become a successful artist. Eventually he studied at the American Academy in Chicago. Froman first became interested in watercolor in 1946 when he moved to Dallas, Texas and he was studying with Rex Brandt and Edgar Whitney. He was also apart of many organizations such as the American Artists Professional League, Inc. Allied Artists of America, Southwestern Watercolor Society and more. 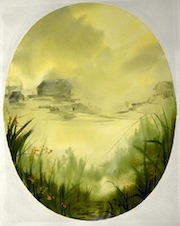 Polly Lui received her education from Dominican College, Houston, Dominican Fine Art Institute, Florence, Italy and UH, University of St. Thomas. After receiving her education she worked as an art director and calligrapher. Lui teaches watercolor, calligraphy and Classical Methods. Her work is showcased all over the world and she has received numerous awards. 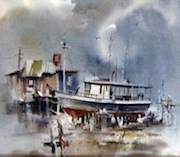 Harold Phenix graduated from the University of Texas in architectural engineering. He lived in Houston and kept up a career as an engineer working for Conoco, Inc., but also was an artist. His work has been shown in many private and public galleries and won numerous awards. Phenix died at his home in Hunt, Texas in June of 2009.

Dolores Price-Porterlives in Kingsville, Texas where she owns and operates the Kairos Gallery. When it comes to painting, her favorite subjects include flowers, beaches, scenes from Mexico, and her grandchildren. 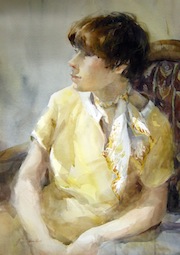 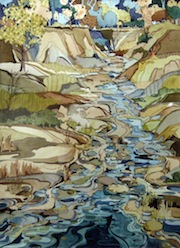 Jo Taylor's formal education was at North Texas State University in Denton, as well as the University of Guanajuato, Mexico. She earned active membership and signature status in the American Watercolor Society, and has painted full-time for gallery shows for 7 years. She is professor emeritus at the Northeast Texas Community College and author of Watercolor Wisdom. She is a dear friend of the McMullen-Connally family.

James Woodruff was born in 1913, in South Texas. After receiving a degree in chemistry and math from North Texas University in Denton and after a stint in the army from 1940-1946, Woodruff earned his master's degree in 1949, in painting and fine arts from Columbia University. He then spent the following year at the Arts Student's League, New York. He then moved back to Texas and spent his next years teaching in Beaumont, Pasadena, Galveston and Houston. He also taught at the University of Houston from 1952-1958 and at South Texas Junior College, which later became the University of Houston.