The California Water Color Society: Genesis of an American Style

The style in which these subjects were rendered was characterized by paintings done on scene with little to no preparatory work. Brushstrokes were strong, using vivid colors and a bold design. This particular genre of watercolor was unique in its usage of the white of the paper as a design element.

Important California Style artists featured in this collection include Barse Miller, Phil Dike, Millard Sheets, George Post, and Rex Brandt, as well as many others.

Though this movement began and flourished in California, it was recognized and exhibited as a major movement from California to the East Coast, including several prestigious galleries in New York.

Rex Brandt (1914-2000) studied at the Chouinard Art Institute where he became acquainted with the California style, Brandt went on to become one of the giants of the movement alongside Phil Dike, Millard Sheets, George Post, and Barse Miller. After WWII Brandt opened up the Brandt/Dike Summer School of Painting to meet the growing demand for watercolor lessons. Not only did Brandt influence countless upcoming artists, he also was recognized as one of the most skilled watercolor artists on the West Coast.

Gerard Brommer (1927-) entered the California Scene in the 1930s and 40s. He is known particularly for his realistic style, and diverse regional subject matter. As well as an artist, Brommer was a gifted educator who wrote several textbooks and instruction guides on the elements and techniques of art, especially the various paint media. 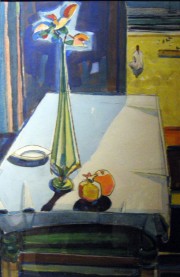 Phil Dike (1906-1990) was another great pioneer of the California style. Dike studied at the Chouinard Art Institute as a teenager with other influential artists such as Millard Sheets, Barse Miller, and Rex Brandt. By the early 1930s he was recognized as one of the leading artists working in the California Style of watercolor painting. Dike also served as a president of the California Watercolor Society and also taught art at the university level for many years.

Dong Kingman (1911-2000) grew up in northern California of Chinese parents. He later went on to study art in China and in 1929, he moved back to San Francisco and became involved in the California School movement. He was a contemporary of George Post and like his colleague, mainly represented San Francisco and the Mendocino Coast in his artwork.

Barse Miller (1904-1973) was one of the first to develop and exhibit the California Style. He became popular nationwide and was exhibited in galleries from California to New York. During WWII Miller was hired by the US government to paint battle scenes as a form of recordkeeping. Not only was Barse Miller a true "father" of the California watercolor movement, but he also taught and influenced many students to explore watercolor. Some of these students went on to make names for themselves within the same movement.

Morris Shubin (1920-) grew up in Southern California and was associated with the latter California Style and by the 1940s he had gallery representation in New York City along with several other prominent California watercolorists. He was known for his geometric, abstract style and also worked as an author and painting instructor.

From the 1930's onward the name of George Post (1906-1997) was well known in the California Style movement. Post was from San Francisco and is best known for his cityscapes, particularly dealing with the construction of the Golden Gate Bridge. His style followed the California trend of painting on location with no preliminary sketching, but his trademark simplicity was also deceptively intricate.

Lyne "Bud" Shackelford (1918-2005) was born in Washington DC. He studied at University of Alabama, The Art Student League in New York and at Chouinard Institute in Los Angeles. He studied closely with other artist during his schooling and today he is thought of as one of the greatest and strongest artist of the "California Style" watercolor tradition. Shackelford was a member of many societies and groups he was a signature member of the American Watercolor Society, the National Watercolor Society, California Watercolor Society, and others. He was also a painting instructor, taught many workshops and wrote several books.

Millard Sheets (1907-1989) was one of the forerunners of the California School along with Barse Miller and Phil Dike. In fact, Sheets and Dike shared a close relationship in regard to watercolor painting, and often painted together. Both graduated from the Chouinard Art Institute of Los Angeles. By the 1930s there was national interest in his art, and his work was being displayed in New York City. During WWII Sheets was a wartime artist for Life Magazine and the Air Force. He also served for a time as President of the California Watercolor Society.

Robert Wood (1889-1979) was a member of the second generation of California Style painters. He studied under several of the founders including Barse Miller, Rex Brandt, and Millard Sheets. His own style was one that leaned more towards the stylized and abstract, a growing trend during the 50s and 60s. Wood also established his own school called the Robert Wood School of Painting in Southern California.

Milford Zornes (1908-2008) moved to Southern California in the 1920s and studied under great artists such as Millard Sheets. His own style grew to reflect that of the California School and he was soon included in their sphere. During WWII Zornes traveled the world as a military artist. After returning, Zornes wrote several books on the topic of painting and also took up teaching his favorite medium, watercolor.