JUNE 5 - SEPTEMBER 26
Mamenchisaurus
This 11-foot-tall, 60-foot-long model of a Mamenchisaurus is the centerpiece of the exhibition. Approximately the size of a tractor-trailer, the life-sized, fleshed-out model of a young adult female Mamenchisaurus, distinguished by its remarkable 30-foot neck, features skin texture on one side and video projections on the other side that provide a look inside the dinosaur’s body. © AMNH/D. Finnin 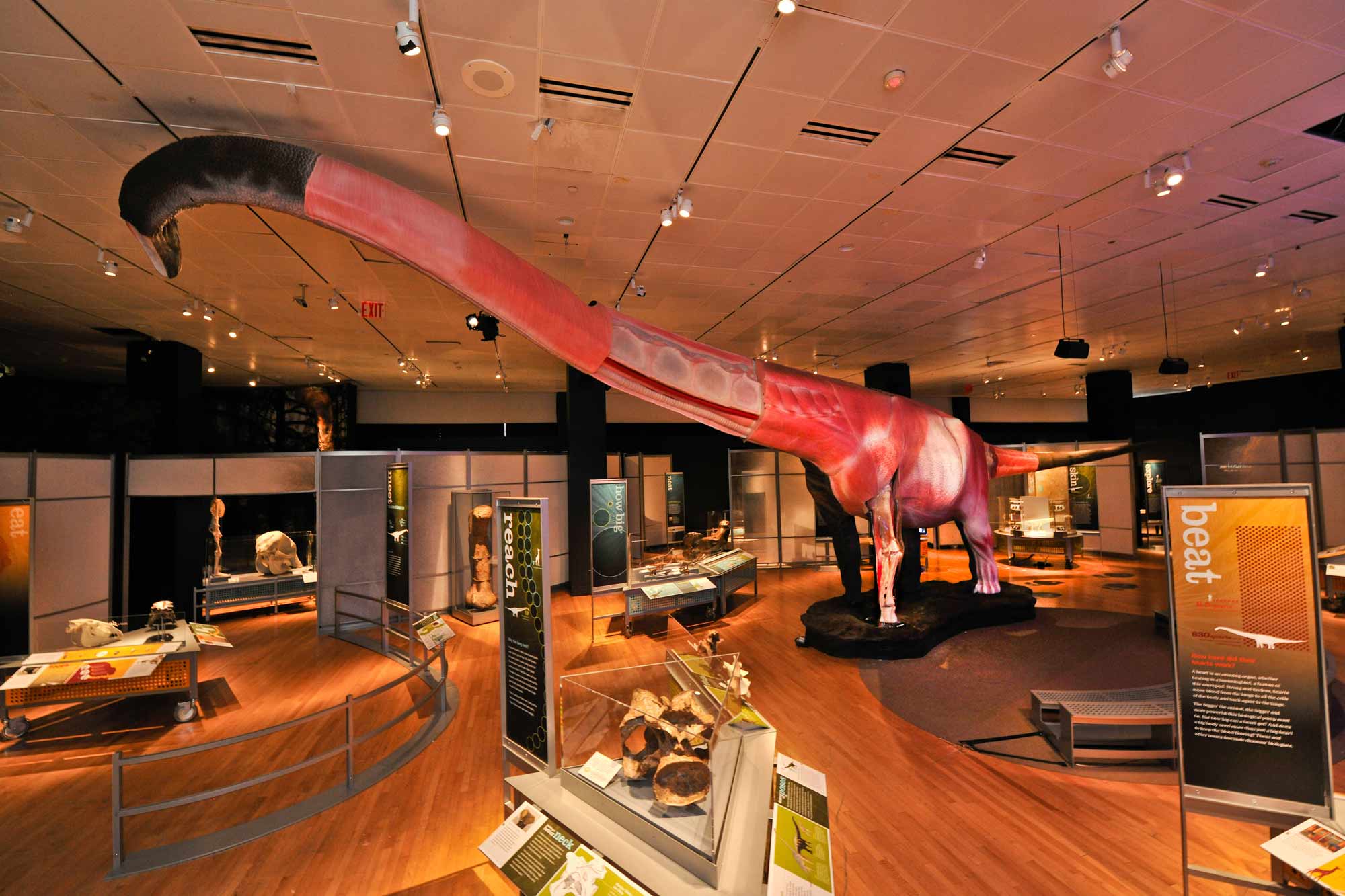 ABOUT:
THE WORLD'S LARGEST DINOSAURS
The World’s Largest Dinosaurs, a major exhibition on view at Baylor University’s Mayborn Museum from June 5 to September 26, 2021, explores the amazing biology of a group of uniquely super-sized dinosaurs: the long-necked and long-tailed sauropods.
Organized by the American Museum of Natural History in New York, the exhibition draws on paleo-biological research that looks in part to living organisms to make inferences about how these giants— some of which grew to be longer than 150 feet, or the length of four standard city buses—were able to thrive, as a group, for approximately 140 million years.
Supersaurus vivianae
This enormous leg belonged to Supersaurus vivianae, one of the largest dinosaurs ever. At its narrowest, the thigh bone was the diameter of a large dinner plate. © AMNH/D. Finnin
THE WORLD'S LARGEST DINOSAURS
EXHIBIT SECTIONS
Titanosaur Nest
A titanosaur hatchling can be seen emerging from a cluster of eggs modeled on a nest found in Auca Mahuevo, Argentina—one of the largest known dinosaur nesting sites in the world—at The World’s Largest Dinosaurs exhibition opening at the American Museum of Natural History on April 16. Weighing in at approximately 11 pounds at birth, a sauropod could grow to be 55 tons as an adult in about three decades. © AMNH/D. Finnin
THE WORLD'S LARGEST DINOSAURS
RESOURCES
DOWNLOAD EDUCATOR'S GUIDE (PDF) 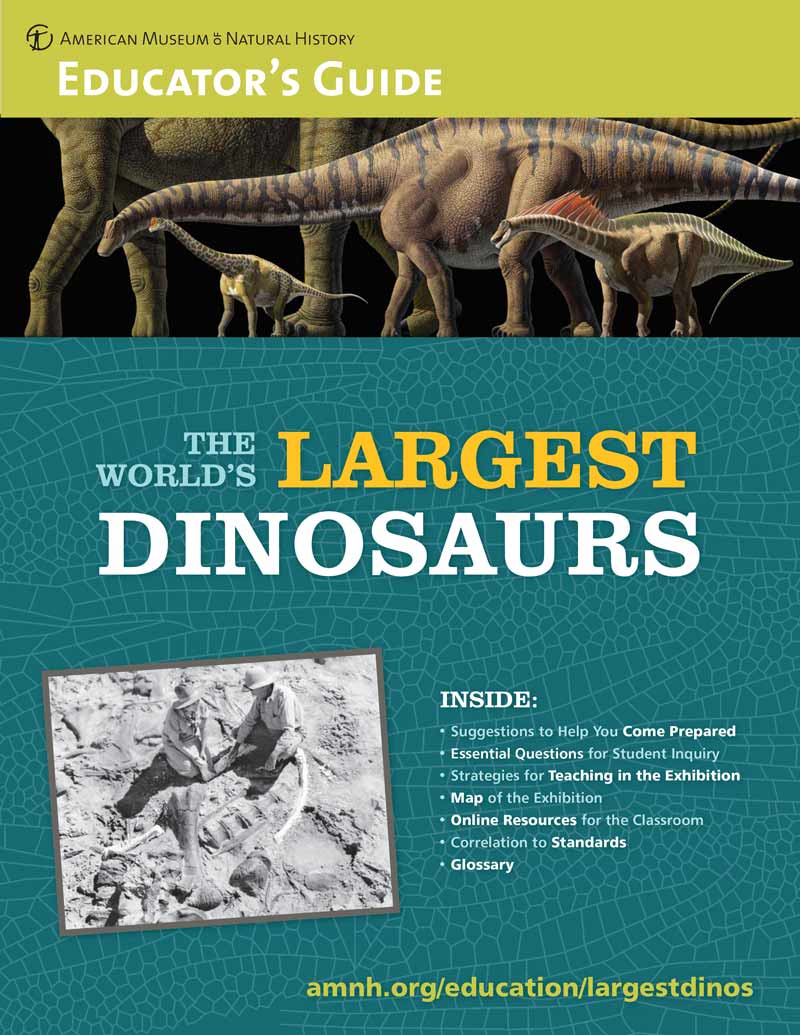 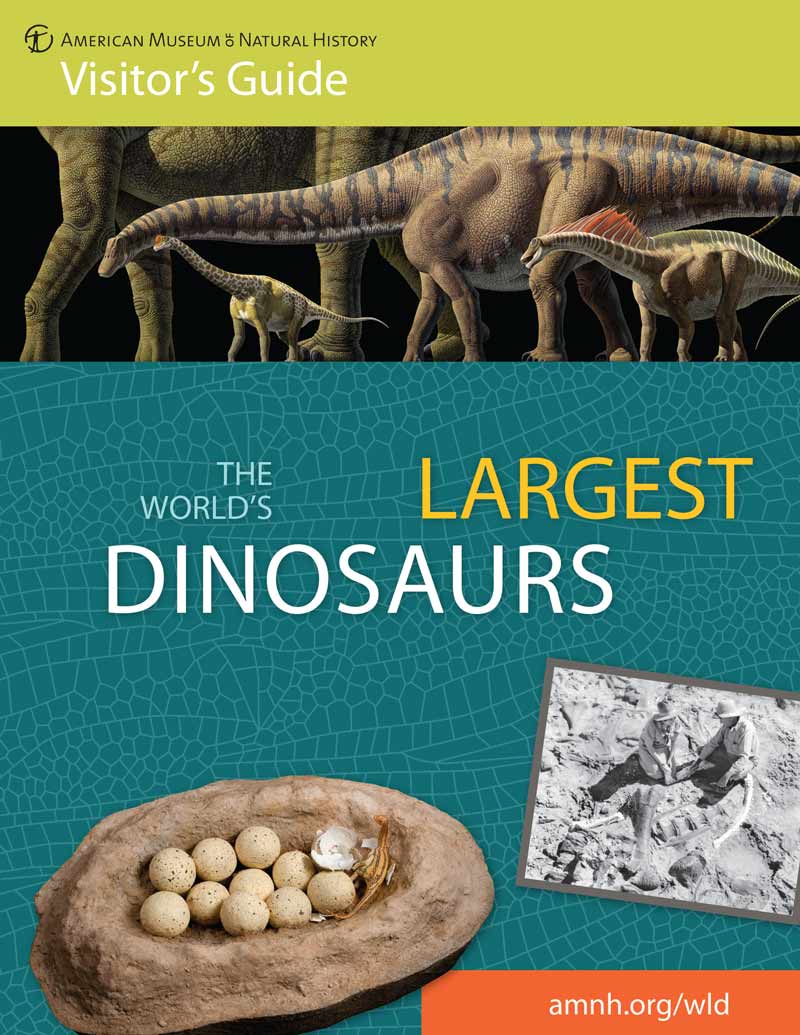 Diplodocus skull
This skull is from a 13-ton sauropod, Diplodocus. Scientists think that Diplodocus, an herbivore, did not tear or chew its food but instead used its pencil-like teeth for nipping, cropping, or stripping branches. © AMNH/D. Finnin
THE WORLD'S LARGEST DINOSAURS
SPONSORS
Generous support for The World's Largest Dinosaur has been provided by:
The World’s Largest Dinosaurs is organized by the American Museum of Natural History, New York (www.amnh.org), in collaboration with Coolture Marketing, Bogotá, Colombia.