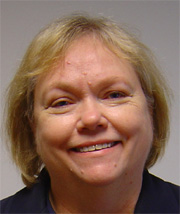 Baylor University will soon be saying farewell to a cornerstone member of its math department. Kathy Hutchison, a Senior Lecturer, will be retiring this May. For thirty-seven years, Mrs. Hutchison has been a tireless member of the department doing what she does best—helping students realize their academic dreams and supporting her colleagues whenever the need arose. Over the years she served on numerous committees and teams, such as the Student Life Committee, the Premedical/Predental Advisory Committee and most recently, the Committee on Committees.

Mrs. Hutchison received both her bachelor’s and master’s degrees from Baylor. After graduating, she accepted a position to join Baylor full-time. That was back in 1984. She admits that in those days, the world was a different place. During the years since, she has witnessed tremendous growth and change, both professionally and personally.

While working on her undergraduate degree she took a Spanish class, and it was in that class that she met her future husband. The two have now been married for almost four decades. Throughout her years at Baylor, she watched their three children grow up to become successful professionals with families of their own.

She witnessed many professional changes as well. When Mrs. Hutchison started in 1984, Dr. Howard Rolf was chair. Since that time, she has worked under five more department chairs: Drs. Ed Oxford, Bob Piziak, Frank Mathis, Lance Littlejohn, and most recently, Dorina Mitrea.

When asked about changes to classes over the years, she admits that class size has changed very little. Changes to students, however, have been more dramatic. “I suppose as a whole [the students] are more sophisticated technologically, but they are also more fragile.” Pressed for explanation, she said they seem to be under much more pressure nowadays than in years past.

One thing that hasn’t changed, she says, is “how nice the students and people here are.” She recalls a time she was carrying a box of bagels to her office when it dropped out of her hands. No sooner had she bent to pick them up when three to four students rushed over to help.

Recently I asked Mrs. Hutchison, if she could look back at all her accomplishments, what made her most proud? Her reply was “acknowledgement from students.” The little notes from students thanking her for making a difference, she said, meant so much. While she loves working with all students, she has a particular interest in those striving to become teachers. She is one of the few people who regularly teaches Mathematics for Education Majors. In doing so, she guides those who will in turn impact countless others. The legacy of her influence extends far and wide.

Mrs. Hutchison once remarked, “I’ve always said I’ll do this as long as it’s fun. And it’s always been fun.” We at the math department are grateful that she found it fun for so many years.

Kathy Hutchison has been a tremendous asset to Baylor’s math department. But she is much more than that. She is a dedicated teacher, a reliable and supportive team member, and a dear friend. She will be sorely missed.