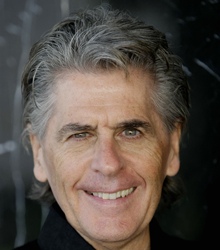 Devlin earned his bachelor's degree in mathematics from King's College London and his Ph.D. degree in mathematics from the University of Bristol. He is a consulting Professor of Mathematics at Stanford University, co-founder and Executive Director of Stanford's Human-Sciences and Technologies Advanced Research Institute, co-founder of Stanford's Media X university-industry research partnership program, and a Senior Researcher in Stanford's Center for the Study of Language and Information.

He is the author of 31 books and more than 80 research articles. He is recipient of the Pythagoras Prize, the Peano Prize, the Carl Sagan Award, and the Joint Policy Board for Mathematics Communications Award. In 2003, he was recognized by the California State Assembly for his "innovative work and longtime service in the field of mathematics and its relation to logic and linguistics." His latest research work has focused on the development of new tools and protocols to assist intelligence analysis and the development and use of videogames in mathematics education. Devlin is actively engaged in promoting the public understanding of mathematics and its role in modern society, topics on which he lectures extensively around the world.

Abstract: The first personal computing revolution took place not in Silicon Valley in the 1980s but in Pisa in the 13th Century. The medieval counterpart to Steve Jobs was a young Italian called Leonardo, better known today by the nickname Fibonacci. Thanks to a recently discovered manuscript in a library in Florence, the story of how this little known genius came to launch the modern commercial world can now be told.

This lecture is based on Devlin's latest book The Man of Numbers: Fibonacci's Arithmetical Revolution (Walker & Co, July 2011) and his co-published companion e-book Leonardo and Steve: The Young Genius Who Beat Apple to Market by 800 Years.

Abstract: Most current math ed video games such as Dimension M and online video resources such as Kahn Academy are essentially new delivery mechanisms for traditional instruction. In the coming decade we should see classroom pedagogy start to change in dramatic ways. This talk will look ahead to the coming revolution.

This lecture is based in part on Devlin's new book Mathematics Education for a New Era: Video Games as a Medium for Learning, published in March 2011 by AK Peters.