Professor Gilbert Strang, MathWorks Professor of Mathematics at the Massachusetts Institute of Technology, will be the sixth speaker in the Baylor Lecture Series in Mathematics. Details of his visit, including specific dates and titles of his two lectures, will be made available soon.

Professor Strang came to MIT upon completing his Ph.D. degree from UCLA in 1959 under the direction of Peter Henrici. He received the S.B. from MIT in 1955, and the B.A. and M.A. as a Rhodes Scholar from Oxford University in 1957. He joined the MIT mathematics faculty in 1962, and was promoted to Professor in 1970. 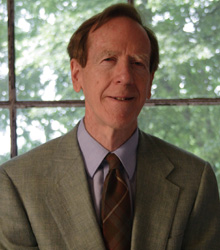 His research focuses on mathematical analysis, linear algebra, and PDEs. He has written textbooks on linear algebra, computational science, finite elements, wavelets, GPS, and calculus. His video lectures are on MIT's OpenCourseWare, and he is on the editorial board of numerous journals, and is the founder of Wellesley-Cambridge Press. His service to the academic community is extensive. Professor Strang served as President of SIAM, 1999-2000, Chair of the Joint Policy Board for Mathematics, 1999, Chair of the U.S. National Committee on Mathematics, 2002, and member of the Abel Prize Committee, 2003-2005. In the Mathematics Department, he was Chair of the Pure Mathematics Committee, 1975-1979.

Professor Strang has received distinctions for his research, service and teaching; among them: the Chauvenet Prize (1976), the SIAM Award for Distinguished Service (2003), the MIT Graduate School Teaching Award (2003), the Von Neumann Prize Medal of the U.S. Association for Computational Mechanics (2005), the MAA Lester R. Ford Prize (2005), the MAA Franklin and Deborah Tepper Haimo Prize (2006), and the Henrici and Su Buchin Prizes of the International Congress of Industrial & Applied Mathematics (2007). Professor Strang is a Member of the National Academy of Sciences and a Fellow of the American Academy of Arts & Sciences. He is an Honorary Fellow of Balliol College, Oxford.

Abstract: These are two separate topics within one lecture. The first part aims to answer a crazy question: is a random triangle acute or obtuse? (We discovered that Lewis Carroll = Charles Dodgson asked the same question. I don't know if this makes it more scientific -- but some surprising mathematics comes into the answer.) And the answer depends on the meaning of "random." Not to be revealed in this abstract.

About mathematical videos and the future of online teaching : Those are surely coming. I would like to describe my experience with linear algebra videos for MIT's OpenCourseWare. The number and the variety of viewers is amazing. I plan to show three minutes of a typical video and ask how to improve. New and more complete courses (with homework and exams) are coming from MITx and Stanford and many more universities. Will the certificates count for credit everywhere? Do you learn more online (or much less)?

I hope the audience has some experience to share.

Exponentials of Difference Matrices and Applications to Graphs

Abstract: The second difference matrix K is tri-diagonal with constant entries 1, -2, 1 down the diagonals. We can approximate the heat equation u_t = u_xx on an interval by u_t = Ku / h^2. The solution involves E = exp(K) and we compute this matrix exponential (and related matrices like sqrt(-K), the square root of the graph Laplacian).

The eigenvectors of K are sine vectors. So E_ij becomes a combination of sines times sines, weighted by eigenvalues of E. Rewriting in terms of sin((i-j)kh) and sin ((i+j)kh), this matrix is T + H (Toeplitz plus Hankel). The Toeplitz part reflects shift-invariance: shift the initial function and the solution shifts. The Hankel part shifts the other way ! We hope to explain this.

A second step is to find a close approximation to these sums -- by integrals. With smooth periodic functions the accuracy is superexponential. The integrals produce Bessel functions and we study also the exact solution -- to the heat equation and the wave equation. There are applications to communication on graphs and networks.