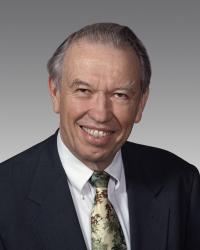 Professor George Andrews, Professor of Mathematics at The Pennsylvania State University and the current President of the American Mathematical Society, was the fourth speaker in this annual series. Professor Andrews visited Baylor University from April 13-16, 2010. The title of his public lecture was Ramanujan and His Amazing Lost Notebook and his second lecture was entitled The World of q-Orthogonal Polynomials and Bailey Chains.

Professor Andrews graduated from Oregon State University in 1960 with simultaneous bachelor's and master's degrees in mathematics. He spent a year as a Fulbright Scholar in Cambridge, England, and then entered graduate school at the University of Pennsylvania (Philadelphia, PA) in 1961, where he earned his doctorate in 1964, under the supervision of Hans Rademacher. He worked at the University of Wisconsin-Madison in 1976-77, after which he went to Cambridge to look for historic works in the Wren Library of Trinity College. There he found pages of mathematical work in Srinivasa Ramanujan's own handwriting. This discovery led to Andrews' spending thirty years on the hundreds of results in what he called Ramanujan's Lost Notebook. In addition to being a world-renowned expert on Ramanujan's work, Andrews has also been involved in computer algebra and teaching, has given many lectures, was on the committee that wrote problems for the Putnam Exam, and has served on the editorial boards of several mathematics journals and on the AMS Committee on Libraries, AMS Committee on the History of Mathematics, among others.

Professor Andrews is a member of the National Academy of Sciences and the American Academy of Arts and Sciences. He has been a Fulbright Scholar as well as a Guggenheim Fellow.

Dr. Andrews is an internationally renowned researcher (in various areas of number theory and combinatorics) and teacher of mathematics. He has received a Distinguished Teaching Award from the Mathematical Association of America. He has also been honored by the MAA as both a Hedrick Lecturer and Polya Lecturer and he has given several invited addresses for the American Mathematical Society.

Professor Andrews has more than 250 journal publications, seven textbooks, and he is an editor of seven other books in mathematics. In addition, he is a member or managing editor of twelve highly ranked mathematics journals, including Discrete Mathematics, the Ramanujan Journal, Contemporary Mathematics, Journal of Combinatorial Theory, and the Annals of Combinatorics.

Wednesday, April 14 at 3:45 pm in D110 of the Baylor Sciences Building: (PLEASE NOTE THE TIME CHANGE)

Abstract: In 1976 quite by accident, I stumbled across a collection of about 100 sheets of mathematics in Ramanujan's handwriting; they were stored in a box in the Trinity College Library in Cambridge. I titled this collection "Ramanujan's Lost Notebook" to distinguish it from the famous notebooks that he had prepared earlier in his life. On and off for the past 34 years, I have studied these wild and confusing pages. In this talk, I will describe Ramanujan's life and discuss the disappearance of this important work for more than 50 years. I will then provide an elementary description of some of the more surprising discoveries in the Lost Notebook.

The World of q-Orthogonal Polynomials and Bailey Chains

Abstract: This talk will introduce q-orthogonal polynomials and will begin with a brief (and I hope compelling) account of their background and history. In 1975-76, Richard Askey and I extended the ideas of Wolfgang Hahn on orthogonal polynomials arising in the world of q. In a couple of papers, we established a variety of connection coefficient theorems from which various Rogers-Ramanujan identities followed. In the early 1980's, the discovery of Bailey Chains and their iterative power led to a neglect of q-orthogonal polynomials in the study of Rogers-Ramanujan type identities. Recently the importance of their role has emerged again. The final portion of the talk will be devoted to an explanation of this re-emergence.