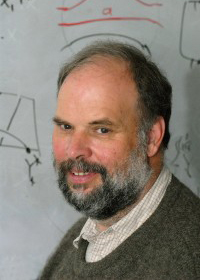 Professor Vaughan Jones is a Professor of Mathematics at the University of California, Berkeley. His public lecture in the Baylor Lecture Series in Mathematics, entitled “Flatland: a great place to do algebra”, was held on Wednesday, September 24, 2008 at 3:30 pm in D109 of the Baylor Sciences Building.

Professor Jones was born in Gisborne, New Zealand. He graduated with First Class Honors from the University of Auckland, where he obtained his B.Sc. in 1972 and his M.Sc. in 1973. He completed his Ph.D. degree at the University of Geneva in 1979. He moved to the United States in 1980 and has taught at UCLA and the University of Pennsylvania before being appointed Professor at Berkeley.

He was awarded a Fields Medal in 1990 for his fundamental contributions to the structure of von Neumann algebras and its (unexpected) applications to knot theory. He discovered a new invariant for knots, the Jones polynomial, which subsequently revitalized the subject of knot theory and an increased interest in low-dimensional topology. Furthermore, as a result of his work, some important new connections between knot theory and quantum groups were developed.

Professor Jones is a member of the American Academy of Arts and Sciences and the U.S. National Academy of Sciences. In 2002, he was awarded Distinguished Companionship of the New Zealand Order of Merit.

For a poster advertising his Professor Jones's lecture, click here.

Flatland: A Great Place to do Algebra

Abstract: We will explain a new kind of algebra, based on pictures in the plane that would have gladdened the heart of Edwin A. Abbott, the author of “Flatland”, a book we will use as a starting point for the talk. We will see how this algebra appears in various guises, from knot theory to statistical mechanics and quantum computation. The talk will be enriched by various anecdotes.

Abstract: We will define planar algebras and show how they inherit more associative algebra structures than one might reasonably expect, probably many more than are currently known. All these associative algebras seem to be of interest, some of them reproducing the planar algebra itself via the theory of sub-factors (which we will also define). Connections will be made with free probability and random matrices.