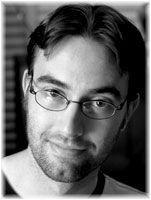 Dano Johnson, award-winning director and animator, will be visiting Baylor University on Thursday, September 27 for the premiere showing of his latest work Flatland: the Movie. The premiere will be held in the Kayser Auditorium in the Hankamer School of Business building at 4:30pm. Everyone is welcome!

I had an opportunity to meet Dano after the movie was shown at MathFest in San Jose in early August. says Dr. Lance Littlejohn, chair of the Department of Mathematics, He is a very bright and talented artist and I am certain that the Baylor and Waco communities will enjoy the movie and opportunity to meet and talk with him.

This animated version of Edwin Abbotts 1884 classic, Flatland: A Romance of Many Dimensions, stars Martin Sheen, Kristen Bell, Michael York, Tony Hale, and Joe Estevez. The movie was produced by Seth Caplan; Dano co-directed the film with Jeffrey Travis and he also is the animator for the film. The story revolves around two-dimensional characters, Arthur Square and his curious granddaughter, Hex. They soon discover that there is much more to their planar life - namely three-dimensional Spaceland and beyond  and this discovery leads them into serious trouble with the evil rulers of their two-dimensional world. The story is about the quest for truth and, even after 120 years, it remains a timeless satire.

Dano began his multi-media career at the University of Texas at Austin's Student Television Station. He volunteered on numerous shows and produced two of his own, learning every process from writing to post-production. This invaluable education led him to produce 'Captain Can Takes on Garbage', an award -winning educational video made for Austin's recycling program. Dano also completed a summer internship at Sesame Workshop in NYC in 2000, fulfilling a lifelong dream and helping executives in the Creative Development department. After graduating in 2001 from the University of Texas, he developed educational content at Ignite! Learning, creating hours of multi-media for middle-schoolers. In 2004 Dano created a new production company with Troy Campbell called Collection Agency Films and began developing animated content for a variety of clients. His web cartoon ads for Kinky Friedman earned a Telly advertising award, while his short film 'Tall Tales & Other Big Lies' won runner-up for best animation at SXSW 2006. His music video for the New York Dolls song "Dance Like a Monkey" won best music video at the 2006 Bradford Animation Festival. His short animated films with long-time collaborator Tate English have won the First Sundays Judges Award (December 2003) and both the 2003 and 2004 Austin Film Festival Trailer Competitions.

For further information, please contact Lance Littlejohn at Lance_Littlejohn@baylor.edu or by telephone at 710-3165.