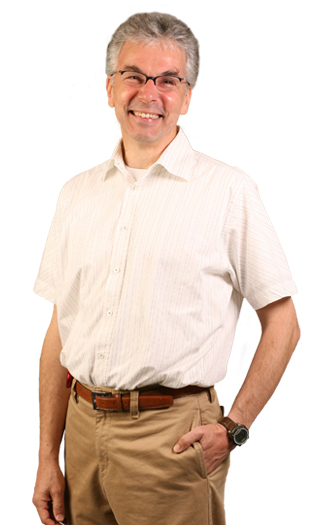 Dr. Klaus Kirsten
Dr. Klaus Kirsten did not share the same interests with many other 17-year-old boys his age. I read Im Anfang war der Wasserstoff [translation: In the Beginning, there was Hydrogen], in which the evolution of the universe and of life on earth was described, he says. This raised my interest in cosmology, and together with the enthusiasm shown by my physics teacher, I decided to study mathematical physics.

After earning advanced degrees from German universities, Dr. Kirsten made his way through Europe, first to Trento, Italy, and then Barcelona, Spain, in order to focus and narrow his research interests. From there, I was lured away with a fellowship from the German Research Foundation to spend four years at the University of Leipzig, he says.

He traveled west in the fall of 2003 to come to Baylor. The people in the mathematics department were extremely friendly and I could imagine the environment being a pleasing one, he says. And the fact that the department had a relatively new Ph.D. program in conjunction with the Baylor 2012 Vision was also very tempting.

He continues to research in mathematical physics, and more specifically, the application of spectral analysis to different areas of physics. It is a research area at the interface of differential geometry, partial differential equations and complex analysis and the interaction between the different fields makes this a very interesting area, Dr. Kirsten says. Generally speaking the research is about understanding effects that are pure quantum effects and that exist as a result of the extremely small size of systems.

For his lifelong contributions to his field  which include more than 100 articles and a book - he has been honored with grants from the National Science Foundation as well as an invitation to become a member of the editorial board of the journal, Advances in Mathematical Physics.

But success and achievement have certainly not changed his reasons for pursuing his love of mathematical physics. Mainly I have chosen this area because the mathematics involved is so beautiful and aesthetically pleasing, he says, and because it is actually applied to some interesting physics.