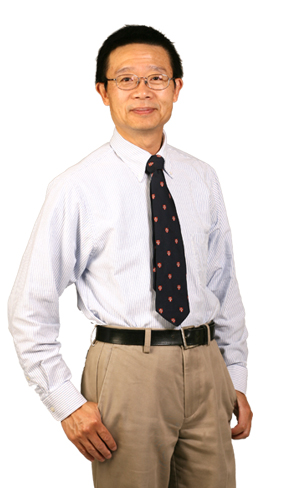 Dr. Qin "Tim" Sheng
While studying for his doctorate in mathematics, Dr. Qin Sheng worked next to one of the worlds most important physicists. I received my Ph.D. from the University of Cambridge, he says. It was awesome to have worked next door to Dr. Stephen Hawking for four years!"

An ocean over and several longitudinal degrees south, Dr Sheng is happy to be in Waco, Texas. Baylor has been a great place for outstanding graduate/undergraduate education and research, he says. It encourages cutting-edge studies in a terrific Christian environment and tradition.

Since 2005, he has taught numerical differential equations and computational finance to graduate students. The graduate program, relatively small in size, allows for students to work alongside faculty, for a more in-depth experience. Collaboration between colleagues and graduate students have been encouraged and work excellently, he says.

His area of research focuses in on computational mathematics. More precisely, it is about the numerical solution of partial differential equations arising form many important engineering and scientific applications, he says. In other words, my research serves to solve complicated mathematical modeling problems by computer.

In addition, he feels that working in the universitys world-class facilities propagates progress in his research as well. We have amazing parallel computation facilities, such as the HPC cluster computers, which have made my research in advanced computational mathematics possible, Dr. Sheng says. Thats why Im here.

Dr. Sheng, author of more than 60 research papers and co-author of one book, is currently focusing on internal combustion machines, trying to find the best configuration of combustors, fuel combinations and temporal controls so that maximum fuel efficiency is possible. My studies have been continuously supported by the university as well as funding agencies including the United States Air Force and the Department of Defense, he says.

Outside the lab and classroom, this mathematician certainly seems like a rarefied breed of human, stretching the capacities of both the right and left side of his mind. I enjoy painting very much and Id like to make some time after my research to learn a musical instrument beyond my old harmonica, he says. Thats only a dream, though.