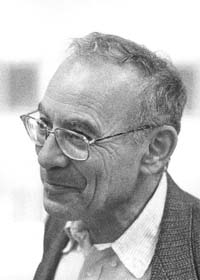 Professor Avner Friedman, Distinguished University Professor of Mathematics and Physical Sciences and the Director of the Mathematical Biosciences Institute at Ohio State University delivered the inaugural address in the department's Lecture Series in Mathematics. The title of his talk was “What is mathematical biology and how useful is it?”; this lecture was given on November 1 at 3:30pm in D109 of the Baylor Science Building.

Dr. Friedman is one of the most visible applied mathematicians in the world and the leading authority in combining mathematical theories, statistical models, and computational methods to solve real-life problems in both industry and the biosciences.

Dr. Friedman is a member of the National Academy of Sciences and a member of the American Academy of Arts and Sciences. He was the Chair of the Board of Mathematical Sciences (1994-1997) and the President of the Society of Industrial and Applied Mathematics (1993-1994). Among his many academic honors and awards are the Sloan Fellowship (1962-1965), the Guggenheim Fellowship (1966-1967), and the National Science Foundation Special Creativity Award (1983-1985; 1991-1993).

Funds were made available for this new lecture series by the Baylor administration; special thanks to Dean Lee Nordt of the College of Arts and Sciences for his support!

The titles, abstracts, times and places for Professor Friedman's lectures are:

Inaugural Lecture: What is mathematical biology and how useful is it?

Abstract: Biological processes are very complex, and mathematical models of such processes are at best just a crude approximation. Nevertheless one can gain some useful knowledge from the models. In this talk, I shall give examples of biological and biomedical problems that have been addressed by mathematical models. The examples will be from areas as diverse as neuroscience, cancer, and aging.

Abstract: The talk will begin with a brief introduction to free boundary value problems for PDEs. It then will describe new free boundary problems which arise in mathematical models of tumors; the PDEs form a coupled system of elliptic, parabolic, and hyperbolic equations. We shall describe recent results on symmetry-breaking bifurcations and asymptotic stability, and state some open problems.