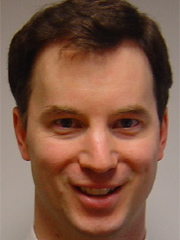 David Ryden grew up in Kansas City, Missouri. In 1998, he graduated with a Ph.D. in Mathematics from the University of Missouri-Rolla, which is now known as the Missouri University of Science and Technology. After a postdoctoral appointment at Tulane University, he joined the faculty at Baylor University in 2002. He is married to Jeanne Hill of the Department of Statistics, and they are the happy parents of two children, Evangeline and Eli. When time permits, Dr. Ryden enjoys studying theology, history, and philosophy, listening to music, and playing piano.

Dr. Ryden's research is in continuum theory, with periodic excursions into related areas such as dynamical systems.