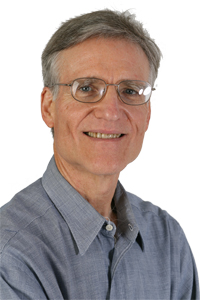 Dr. Johns grew up in Atlanta, Georgia and always liked math and history. As an undergraduate he attended Furman University in South Carolina, choosing Furman because it had a good academic program and a good track team. At Furman he ran the mile, and, later, threw the javelin. Dr. Johns decided to major in math instead of history because he didn't think he wanted to be a teacher and didn't know what else one would do as a history major. After Furman he went to graduate school at Vanderbilt University. Dr. Johns had a hard time at first, probably because one of his teachers was Dr. Ray Cannon (currently at Baylor). Things got better, and he chose algebra (ring theory) as his area of research and Dr. Charles Megibben as his Ph.D director. At some point he decided that becoming a teacher wasn't so bad after all. After receiving his doctorate, Dr. Johns entered the job market at the worst possible time for prospective college teachers (the space program was losing funding and many mathematicians were looking for jobs). However, he was lucky enough to find the best possible job in the nation: faculty member at Baylor University. Dr. Johns has now completed 37 years at Baylor and plans to teach until he's 100 (just kidding). Seriously, Dr. Johns thinks Baylor is a great place to teach, and he is thankful for the opportunities he has had here.

In the first few years of his academic career Dr. Johns worked on problems in ring theory. Later he got away from ring theory and took on some administrative responsibilities, including Director of the Honors Program and Associate Dean for Arts and Sciences. After ending these administrative responsibilities he became interested in mathematics education, participating in the redesigning of the curriculum to better serve the needs of Baylor's prospective teachers. Recently he has enjoyed leading workshops for current middle school and secondary teachers in the Waco area.