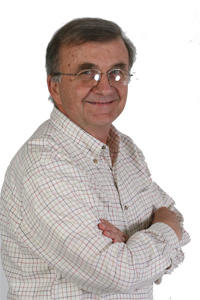 Dr. Cannon was born in Connecticut, but it did not take him long to discover the winters were nicer in more Southern climes. After graduating from Tulane, he served on the faculties of Vanderbilt University (He taught his present colleague Dr. Johns in a graduate class there), University of North Carolina-Chapel Hill, and Stetson University. He was a visiting professor at Baylor University in 1978-9, and returned on a permanent basis in 1980. ;He also served as a Visiting Professor at the United States Military Academy at West Point during the year 1999-2000. Dr. Cannon enjoys practicing for retirement during the summer by traveling and trying to play golf.

Dr. Cannon is interested in the transition from school mathematics to collegiate mathematics, and served in the Advanced Placement program in a variety of roles, including leading the grading of the AP Calculus Exams from 1992 to 1995, and being on the committee that writes the exams. He serves as a long time consultant for The College Board, leading professional development workshops for high school teachers. He also serves on committees of the Mathematical Association of America which are concerned with school/college articulation issues. At Baylor, Dr. Cannon served on the committee that helped implement the Baylor Interdisciplinary Curriculum, and team-teaches World Cultures III, BIC 2334.

Award from the Southwestern Region of the College Board for outstanding contributions to the Advanced Placement Program, 1990.

Outstanding Teaching Award for tenured faculty in the College of Arts and Sciences at Baylor University, 1991

Named a Piper Professor for 1997 by the Minnie Stevens Piper Foundation, one of 10 professors selected to recognize outstanding achievement in the teaching profession in colleges and universities in the State of Texas.

Special Recognition Award in 1998 for outstanding contribution to the development of Advanced Placement in the Southwestern Region of the College Board.

Commander's Award for Public Service, presented by the Department of the Army, 2000