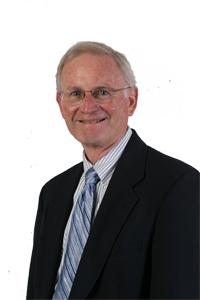 A native of Dallas, Texas, Dr. Mathis has been at Baylor since 1981. He served as Graduate Program Director for Mathematics from 1996 to 2004, as Associate Chair from 2004 to 2009 and as Associate Dean for Sciences in the College of Arts and Sciences since 2005. Prior to coming to Baylor he was a faculty member at Auburn University from 1976 to 1981 and a NASA/ASEE Summer Faculty Fellow at Marshall Space Flight Center in Huntsville, Alabama in 1980 and 1981.

Dr. Mathis' research is in the areas of numerical analysis, optimization, parameter estimation and inverse problems.

Kent Riggs, An Analysis of a Two Predator and One Prey Model, MS, Baylor University, 2003

Robert Will, Powell's Method and the Simplex Method of Nelder and Mead for Solving Unconstrained Minimization Problems without Calculating Derivatives, MS, Auburn University, 1981

Steve Deutschendorf, A Comparison of Three Methods for Estimating the Condition Number of a Real Matrix, MS, Auburn University, 1981