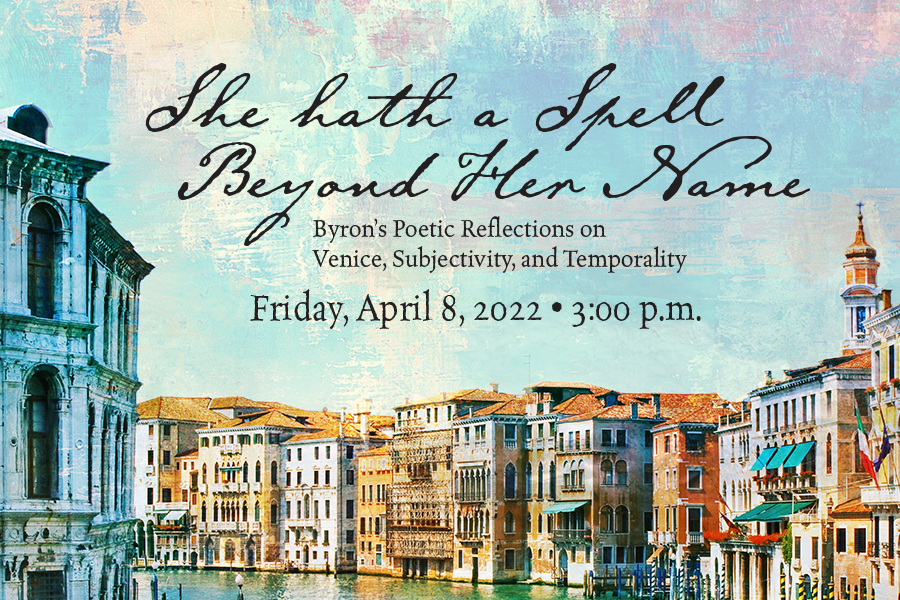 Dr. Mark Sandy, Professor of English, Durham University (UK) and Armstrong Browning Library Three-Month Research Fellow, will present a lecture, "She hath a Spell Beyond Her Name: Byron's Poetic Reflections on Venice, Subjectivity, and Temporality," in the Hankamer Treasure Room of Armstrong Browning Library on Friday, April 8, 2022, at 3:00 p.m. CDT. A reception will follow the lecture. This event is free and open to the public, and will be livestreamed on Zoom.

"Venice as both a historical place and an atemporal myth—the realized and unrealizable city—is central to a poetics of temporality and selfhood in Byron," said Sandy. "For the Byronic imagination, Venice is the real and unreal city that commingles its solid architectural structures with watery insubstantiality, myth with history, personal memory with historical monument, and poetic artistry with the writing of history."

Professor Sandy is the author of several books and the editor of collected essays that explore the Romantic and Victorian periods including Romantic Echoes in the Victorian Era (Ashgate, 2008), Romantic Presences in the Twentieth Century (Ashgate, 2012), Venice and the Cultural Imagination (Pickering & Chatto, 2012), Romanticism, Memory, and Mourning (Ashgate, 2013), The Persistence of Beauty: Victorians to the Moderns (Pickering & Chatto, 2015), Ghostly Encounters: Cultural and Imaginary Representations of the Spectral from the Nineteenth Century to the Present (Routledge, 2021), and the forthcoming Romantic and Victorian Spectral Presences: From Wordsworth to the Brownings. His recent exploration of critical theory and twentieth-century British and American Literature (including Jewish American Literature of the post-war era) resulted in Transatlantic Transformations of Romanticism: Aesthetics, Subjectivity, and the Environment (Edinburgh University Press, 2021).

"We are excited to have Dr. Sandy at the Armstrong Browning Library as our three-month research fellow after an almost two-year delay caused by the pandemic," said Jennifer Borderud, director of the Armstrong Browning Library and Museum. "While his current research examines ghostly presences in Romantic and Victorian poetry, his lecture on Byron reflects the continued growth of our holdings not only in the area of Browning studies but also in nineteen-century studies."

Those interested in attending who cannot be on-site at Armstrong Browning Library & Museum are welcome to visit baylor.edu/library/venice and register for Zoom webinar credentials that will be delivered the day prior to the event. The webinar will allow remote participants to participate in the Q&A session that will follow Dr. Sandy's presentation.

For more information, visit baylor.edu/library/venice, send a message to abl_office@baylor.edu, or call Christi Klempnauer at (254) 710-4968.