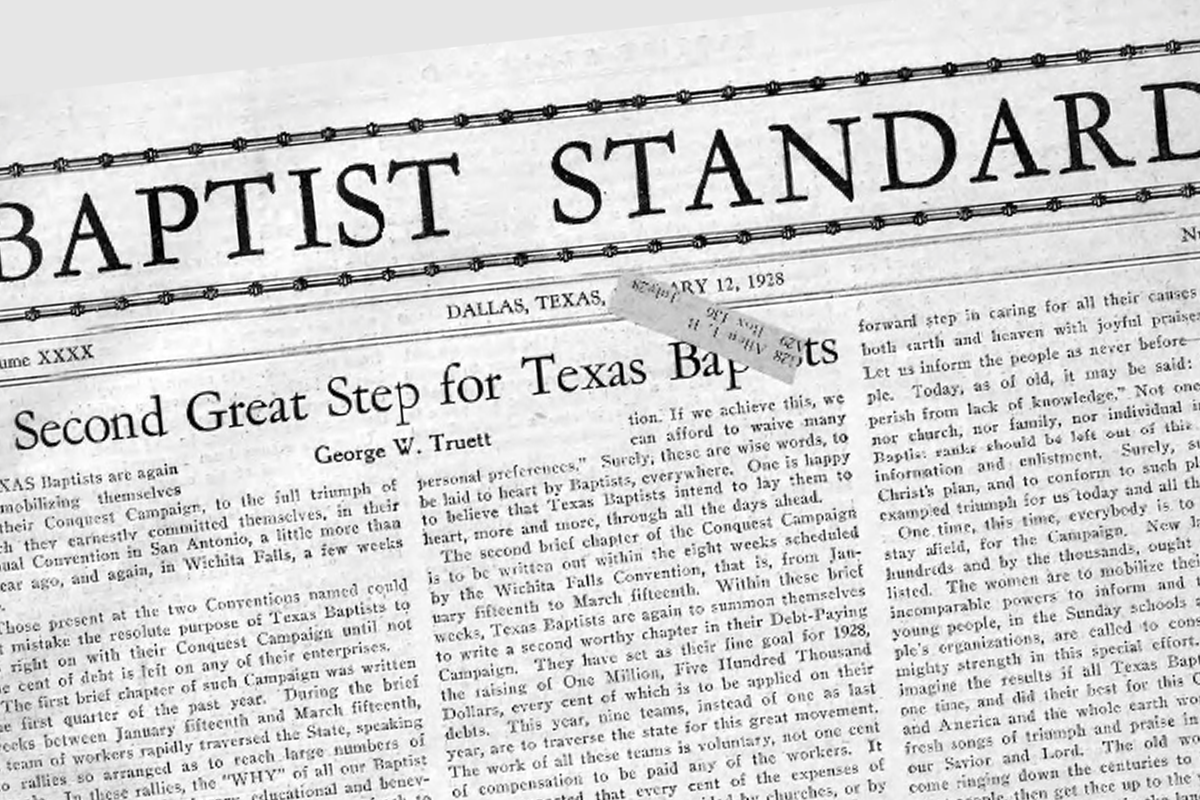 The Baylor University Libraries, Texas Baptists, and Baptist Standard Publishing recently reached an agreement to digitize the Baptist Standard and the earlier Baptist News to make the newspaper accessible online to scholars as well as laypersons.

An initial set of archived material, 531 issues from 1928 to 1944, are now available and additional issues will be added as they are digitized. This work is sponsored through a gift from an anonymous donor.

"In fulfillment of a shared vision, the Baylor Libraries are pleased that all parties have agreed not only to allow the entire run of the Baptist Standard to be digitized but also shared with the world," said Kathy Hillman, associate professor and director of Baptist Collections and Library Advancement at Baylor University. "The newspaper provides valuable insight into the history and culture of Texas Baptists as well as their broader impact"

Since 1888, the Baptist Standard - formerly Baptist News - has served Texas Baptists as an independent source for news and conversation that has helped to unify and coordinate the work of churches. Today the Baptist Standard is published online throughout the week at baptiststandard.com. A free newsletter that digests Standard content is emailed to subscribers on a weekly basis. However, prior to 2008, it was only available in print.

"The Standard is a record of Baptists in Texas and around the world," said Eric Black, executive director, publisher, and editor for the Baptist Standard Publishing Company. "The Standard contains more than 130 years of historical, cultural, political, social, and religious records of Texas, the United States, and the world."

At its height, the newspaper was a staple for Texas Baptist families, being found in more than 300,000 homes across the state.

"At one time, the Standard had an enormous circulation, eclipsing even some nonreligious publications. From that standpoint, the Standard carried significant influence in hundreds of thousands of homes and millions of people’s lives," noted Black.

Digitizing this valuable cultural and historical resource and making it available online enables researchers and others around the world to quickly surface materials and discover connections that previously were difficult or impossible.

"This type of access will allow researchers to quickly find reports on people and events they are studying," said Alan Lefever, director of the Texas Baptist Historical Collection. "Because of this ability to expedite research, I believe more people will study the history of Texas Baptists. Topics and historical events previously ignored or understudied will be seen in a new light — or for the first time."

While the Baptist Standard chronicles the lives and works of Baptists in Texas, its impact is truly national and global because of the figures who have been involved with or were reported on in the newspaper.

"The Standard contains a famous photo of editor E.S. James sitting and talking with President John F. Kennedy in the Oval Office. Decades before that, editor J.B. Cranfill, who privately owned what eventually become the Baptist Standard, was nominated by the Prohibition Party in 1892 for vice president of the United States," Black noted. "Then, there was the infamous J. Frank Norris and the not-so-infamous J.B. Gambrell, both editors of the Standard. Baptist Standard editors were giants, not just among Baptists, but among Texans and Americans."

The Texas Baptist Historical Collection, which is conveniently located in Waco, holds the only known complete run of the Standard. Darryl Stuhr, director of Digitization and Digital Preservation at the Baylor Libraries, believes that digitizing a collection of this size will take about 18 months.

"I am excited the full Standard archive will soon be readily available. Baptists can celebrate having such an influential institution as the Baptist Standard easily searchable from anywhere in the world," Black said.