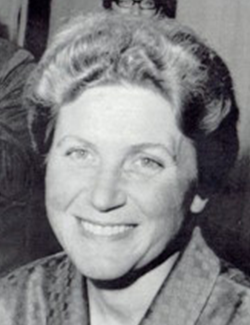 Svetlana Iosifovna Alliluyeva Stalina was born on February 28, 1926, to Joseph Stalin and his second wife Nadezhda Alliluyeva. Svetlana was the youngest of Stalin’s children and his only daughter. She grew up inside the Kremlin and graduated from Moscow University. After her father died, she took her mother’s maiden name.

Alliluyeva married several times in the Soviet Union and had two children, Iosif Alliluyev and Yekaterina Zhdanova. At age 41, while in India to spread the ashes of Brajesh Singh, whom Alliluyeva called her husband even though they were never allowed to legally marry, she approached the United States Embassy in New Delhi and asked for political asylum. After brief interludes in Italy and Switzerland, Stalin’s daughter entered the United States. Upon her arrival in April 1967, Alliluyeva was considered the most famous Soviet defector to date, and the press flocked around her.

Soon after her defection, Alliluyeva wrote her first book, Twenty Letters to a Friend, and a few years later published another memoir titled Only One Year. In 1970, she married William Wesley Peters, and in 1971, they had a child, Olga (later Chrese Evans). The couple divorced in 1973, and Alliluyeva received custody of Olga.

In 1984, Alliluyeva moved back to the Soviet Union to reunite with her adult children. Olga, who did not speak Russian, accompanied her mother, and for the first time learned her mother’s complicated family history. After 18 months in the Soviet Union, they moved back to the United States. Following her return to America, she stayed out of the limelight as much as possible, focusing instead on writing and other academic pursuits. Alliluyeva remained an active Christian, and on October 4, 1990, contacted Michael Bourdeaux about a translating job at Keston College.

Svetlana Alliluyeva lived quietly until she died of cancer in Richland Center, Wisconsin, on November 22, 2011, at the age of 85.

More information about Svetlana Alliluyeva can be found in the Soviet Union files at the Keston Center for Religion, Politics, and Society.

This finding aid is currently incomplete. Please contact the Keston Center for Religion, Politics, and Society for more information.