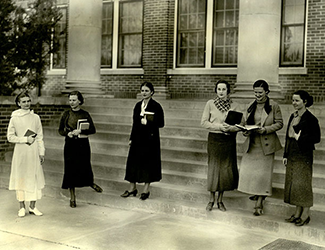 In the 1840s, Baptists identified a need for a college in the new Republic of Texas and chartered Baylor College at Independence in 1845. Initially, the school was coeducational, but the male and female students were separated in 1851 after Rufus C. Burleson became president. The men relocated to Windmill Hill while the women moved to Academy Hill. Burleson and the director of the female department, Horace Clark, disagreed on the level of oversight Burleson held and the female department, Baylor Female College, became its own school in 1866. The economic landscape of Texas had shifted by the late 1880's, and after the railroads by-passed Independence, both schools changed locations. In 1886, the male school moved to Waco and merged with Waco University while the female school accepted an invitation from Belton. The Great Depression brought the school to the brink of bankruptcy, but a generous gift from John G. and Mary Hardin saved the college. In honor of their donation, the school was renamed Mary Hardin-Baylor College in 1934.

For most of its history, Mary Hardin-Baylor was the oldest college for women west of the Mississippi. In 1971, however, the school became co-educational and seven years later it was renamed the University of Mary-Hardin Baylor. Today the university enrolls around 3,000 students and works closely with Baylor University to maintain and preserve their shared heritage at Independence.