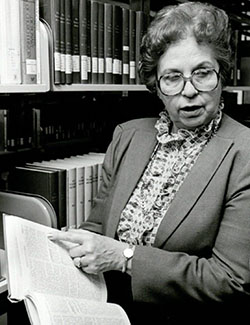 Rosa Georgene "Jean" Furr Tolbert, was born in Fernwood, Mississippi on April 26, 1925. She grew up in Tylertown, Mississippi for most of her adolescence where her father managed a local general store and her mother worked as a nurse.

Tolbert graduated high school in 1943 and enrolled in Mississippi College in Clinton, majoring in history. While attending the school, Jean met her future husband, World War II veteran Charles Tolbert. Jean graduated with her bachelor's in 1947 and married Charles on June 2, 1949.

Tolbert taught history at Copiah-Lincoln Junior College in Wesson, Mississippi for two years before returning to Mississippi College. At this time, Tolbert performed clerical work and aspired to become a librarian. The Tolbert family moved to Waco in 1957 as Charles joined the sociology department at Baylor University. Jean initially served as the religion librarian in the Tidwell Bible Building until 1968 when she transitioned to the role of reference librarian for Moody Library. As Tolbert worked at Baylor, she earned her Master of Library Science from Texas Woman's University in 1965. She retired from Baylor University in 1991 after thirty-three years of service.

Tolbert was an active participant in several local organizations including Baylor Round Table, Historic Waco Foundation, Waco-McLennan County Library Commission, and the First Baptist Church of Waco. She passed away on April 17, 2008 at the age of eighty-two.

More information about Jean Furr Tolbert can be found at the Institute for Oral History.