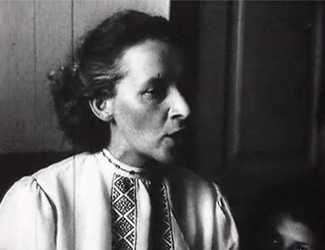 Nadezhda Teodorovich (previously Nadseja Abramawa) was born in 1907 in the Minsk Governorate of Belarus. She attended classes at the Minsk Pedagogical University before graduating from the Belarusian Medical University in 1942. Teodorovich actively promoted Belarusian nationalism, culture, and heritage from the time she lived in Belarus to when she died in exile. She lived in Belarus throughout most of the German occupation of the country during World War II. Head of the girl's division of the nationalist White Ruthenian Youth Organization, she contributed to the newspaper, "Long Live Belarus!" (Жыве Беларусь). In 1944, she participated in the Second All-Belarusian Congress and the Belarusian Central Council. Teodorovich fled to Germany in the summer of 1944 and settled in Munich where she remained after World War II.

While in exile, the doctor officially changed her name from Nadseja Abramawa to Nadezhda Teodorovich. In Munich, she spent time in a monastery and converted from Eastern Orthodoxy to Catholicism, becoming a member of the St. Nicholas Russian Catholic Church of Byzantine Rite in Munich. From 1951 through 1970, she worked at the Institute for the Study of USSR in Munich. She published a journal, "Religion and Atheism in the USSR" (Religion und Atheismus in der UdSSR) and closely monitored the Soviet press, recording acts of religious persecution committed by the Soviets. During this period, Teodorovich was known for her "nationalistic and anti-communist" views and contributed to Radio Free Europe/Radio Liberty. Teodorovich died on February 18, 1979, in Munich.

More information about Nadezhda Teodorovich can be found in the Keston Center for Religion, Politics, and Society.