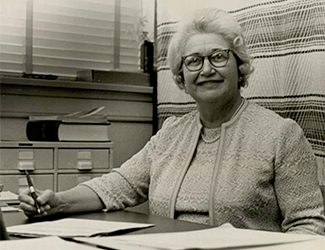 Lois Smith Douglas Murray Strain was born on October 9, 1906, in West, Texas. She attended Baylor University, receiving two B.A. degrees. Strain did graduate work at the University of Chicago and the University of Wisconsin but did not receive a degree from either university. Back at Baylor by 1930, she accepted a position as professor of English. She married Lowell N. Douglas in 1931. The couple had two children together before Douglas was killed in action during World War II.

Strain served in many positions at Baylor University. Though she began as an English professor, she was also the director of the Armstrong Browning Library, director of the Historical Research Office, development officer, and Baylor Historian. Strain wrote a number of books, including Health Topics for College Freshmen, Effective Living, and Remedial English, all three textbooks, and Through Heaven's Back Door, a biography of Baylor professor and legend A. J. Armstrong. She is especially known among Baylor historians as the author of Baylor at Independence, a book about Baylor University from 1845-1886 that she wrote based on notes collected by Lily Russell. From 1961 to 1968, Strain organized Russell's notes and wrote one of the definitive texts on the university’s history.

Lois Strain married John D. Murray in 1956 in the Armstrong Browning Library on the Baylor campus. He passed away before the early 1960s. She married Arthur Strain around 1972, also the year that she retired from Baylor. He died on October 25, 1975. Lois Smith Douglas Murray Strain passed away on December 18, 1998.