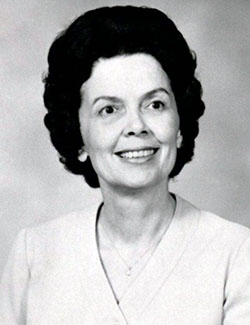 Katy Belle Jennings Stokes, the daughter of Thornton Lamar Jennings and Pauline Rice Jennings, was born on July 3, 1924, in Mabank, Texas. After graduating valedictorian of her class in 1941, Stokes attended Texas State College for Women (now Texas Woman's University). She later transferred to Baylor University where she graduated with a bachelor's degree in English and business in 1947. While attending Baylor, she met George Stokes, and the two were married on August 25, 1946.

After George earned his Ph.D. from Northwestern University in Illinois, the Stokes family returned to Baylor University in 1952 when George joined the faculty of the communications department. Katy became actively involved in the Baylor Round Table, serving as president of the organization in 1961-1962.

Throughout her life, Stokes participated in Baptist affairs. She and George were active members of Seventh and James Baptist Church in Waco, Texas, where she served as a Sunday school teacher and the Director of the Women's Missionary Union. She also volunteered as a trustee for the Southern Baptist Convention's Sunday School Board from 1975 to 1983 and served on the Centennial Committee for the Baptist General Convention of Texas.

Stokes was also an avid writer for much of her post-collegiate life. For fourteen years, she contributed for a column entitled "To the Store and Back" for her parents' local newspaper, the Mabank Banner. In 1980, Stokes wrote Paisano: Story of a Cowboy and a Camp Meeting which followed the story of preacher L.R. Millican and the Paisano Baptist Encampment near Alpine, Texas. In 1985, Stokes composed A City of Angels in honor of the work Elsie Gayer had done in the field of geriatrics in San Angelo. In 2003, Stokes compiled letters she had written to her mother throughout her lifetime and edited them for her final book, Letters from Katy. Stokes passed away on March 18, 2012 and is buried in Oakwood Cemetery in Waco, Texas.