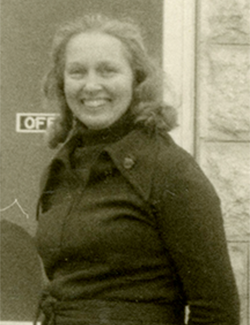 Virginia Walker Smith was born in Farmington, Missouri in 1930. She studied education at the University of Missouri and then worked as an elementary school teacher until 1954, when she began pursuing a master's degree in religious education from the Carver School of Missions and Social Work in Louisville, Kentucky. Virginia met Paul Smith in Louisville and the two were married in 1956. They eventually had four children together. In 1961, the Foreign Mission Board of the Southern Baptist Convention placed the couple as missionaries in the Middle East. Following two years of language study in Beirut, Lebanon, the Smiths moved with their family to Jordan, first to Ajloun and then, in 1965, to Amman. They were the first Southern Baptist missionaries to live in the capital. Virginia taught kindergarten and English at the Baptist school there.

During their furlough in 1966, Virginia and Paul both began graduate studies in Arabic at the University of Texas at Austin. In 1978 they shifted to work as teachers and the "Industrial Chaplain" in eastern Saudi Arabian towns for employees and foreign laborers of the national oil company, Aramco. The Smiths returned to the United States in 1980 after Virginia was diagnosed with breast cancer. Following her treatments, they moved to Fes, Morocco, for Paul to serve as a pastor and to teach high school and college students in secret. In 1990, Paul became the director of relief work for Global Partners in Iraq. Through this non-governmental organization, Virginia and Paul aided the Kurds who were returning to villages that had been destroyed by the Iraqi government prior to the Gulf War. The Smiths also coordinated drilling water wells, distribution of vegetable seeds, restoration of flour mills, and operation of mobile health clinics in northern Iraq. They lived in Iraq for six years.

After their retirement in 1996, the Smiths continued to travel and serve as advocates for the people of the Middle East. In 2001, the they returned to work for six months at the same church in Morocco where Paul had been a pastor sixteen years prior. From 1997 to 2007 Paul and Virginia lived two months each summer in Saudi Arabia, where Paul served as a relief pastor. They moved to Waco in 2004.

More information about Virginia Smith can be found in the Virginia and Paul Smith Missions papers at The Texas Collection.