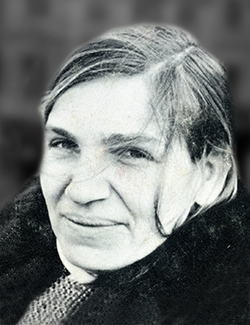 Born in a small Western Siberian town in 1941, Aida Mikhailovna Skripnikova came from a Baptist family. However, her pacifist father was imprisoned and shot for refusing to fight in the army when she was an infant. Although she attended church as a child, Aida's mother died when she was only eleven, and she received an atheistic Soviet education. In 1960, the teen moved to Leningrad where her brother Viktor lived. When Viktor became ill, he sought spiritual reconnection and became a devout believer. His death at age 25 influenced Aida to attend services. The inquisitive young woman converted to the Christian faith and immediately and fearlessly shared her beliefs with others and made contact with many foreigners, including several Swedes.

Though Baptist leaders discouraged her, Aida could not be restrained. Her first arrest came in 1962 for distributing homemade New Year's cards. Found guilty, she lost her job and residency but remained active in a church group. New decrees outlawing religious meetings and instruction of children especially targeted unregistered Baptists. In 1965, Soviet authorities arrested Aida Skripnikova and several fellow believers at a clandestine worship service held in a forest. In November 1965, she was sentenced to one year in a labor camp in Perm and released in November 1966.

Officials arrested Aida a third time in 1968 after she attended Easter worship services. Because of her contact with the West, the judge allowed Ms. Skripnikova to speak at her trial. Sentenced to six months, Aida was imprisoned on December 30, 1968, and suffered severely from lack of warm clothing and inadequate food. She was released on April 12, 1971, but suffered from restrictions usually assessed for major crimes. Prison aged the young woman and did not end her struggles, but Western friends relate that more than 45 years later, Aida Mikhailovna Skripnikova remains faithful, serving her Heavenly Father and inspiring others.

More information about Aida Skripnikova can be found in The Keston Center for Religion, Politics, and Society.

Other Materials about Aida Skripnikova