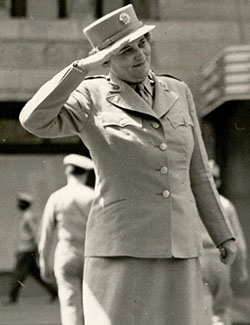 Emma Julia Morrill Shirley, the daughter of Lemuel Hatch Morrill and Amelia Puckett Morrill, was born in Waco, Texas on November 23, 1899. She graduated from Waco High School in 1915. In 1921, she married Newton A. Shirley with whom she had one daughter, Amy.

After some brief teaching stints, Shirley earned her bachelor's degree from Baylor University in 1923, majoring in government and minoring in English. In doing so, she became a third-generation graduate at Baylor. In the 1930s, she worked as the secretary for Pat Neff during his presidency at Baylor. She attained her master's degree from the University of Texas. Her thesis (1938) examines Pat Neff's gubernatorial administration of Texas from 1921 to 1925.

Shirley continued teaching at several institutions, including time at Baylor University where she was an instructor for the English department and head of the Secretarial Science Department. In 1942, Shirley felt compelled to join the war effort, enlisting as a sergeant in the Women’s Army Corps. Her duties centered primarily on publicity for the Eighth Service Command based in South Texas.

Following a medical discharge from the military, Shirley pursued graduate-level courses at Columbia University and New York University for writing and journalism. In 1971, she published a biography of local businessman William Hammond entitled Never Say Impossible. She wrote for several newspapers and magazines throughout her career including the Christian Science Monitor, Baptist Standard, Texas Outlook, Dallas News, Houston Post, Houston Chronicle, and the Waco Citizen. In periodicals, she often used her middle name, Julia, as her pen name. Shirley was an active writer into the early 1980s.

More information about Emma M. Shirley can be found at the Institute for Oral History and in the Emma Julia Morrill Shirley papers at The Texas Collection.