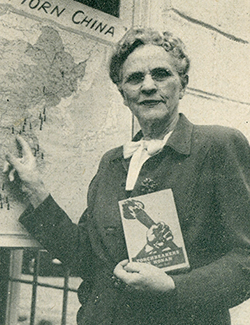 Annie Jenkins Sallee was born in Waco in 1877. She earned her B.S. from Baylor University in 1897 and completed her master's degree just two years later, becoming the first woman at Baylor to ever do so. She taught at Moody Bible Institute and Decatur Baptist College before attending the Baptist Missionary Training School in Chicago. She completed her work there in 1905 and returned to Texas where she met William Eugene Sallee, a fellow missionary to China. The two were married in 1906 in China and were some of the first missionaries to reach the interior of the country. Sallee organized an industrial school for women before the couple returned to the United States in 1930. William passed away just one year later. Annie wrote several biographies, including one of her husband, but resumed her work in China in 1935. The Japanese captured her for nine months during World War II and Sallee came back to the United States in 1943. She remained active at First Baptist Church of Waco until her death in 1967.