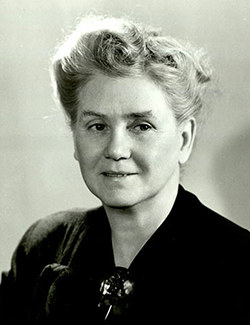 Born in Kerrville, Texas, on January 24, 1887, Lily McIlroy Russell moved several times with her family before settling down in Waco. She attended Baylor University and received her bachelor's degree in 1911, after which she taught English at Baylor Academy for five years. On May 14, 1917, she married Junius Brownrigg Russell and the couple had one daughter, Mary Claudia. She and her husband later divorced, and she left Baylor for a time but returned in 1926 as Assistant to the Dean of Women. Pat Neff appointed her as the Dean of Women five years later and during her time at Baylor, she also worked as the Director of Public Relations, Dean of the Union Building, chaired the Baylor Centennial Committee, and became the official University Historian in 1950 until her death in 1958. In addition to her many roles at Baylor, Russell actively engaged with the Waco community and served on various boards and committees. Although she was unable to write a history of Baylor before her death, Lois Smith Douglas Murray Strain, and Sue Moore used her research to complete her dream, entitled Baylor at Independence.