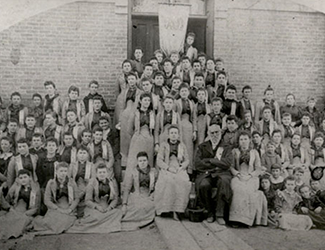 Founded in October 1887, the Rufus C. Burleson Society was one of only two Baylor University societies that allowed women into its ranks. While the original name is unknown, the society named itself after Baylor’s then-president, Dr. Rufus C. Burleson. Reaching their peak during the early twentieth century, Baylor literary societies enjoyed competition among each other. Each society provided a means for members to socialize outside of a purely academic setting. The greatest competition came during joint debates where each group would meet and debate on academic topics. Seeing a steady decline during the Roaring '20s, the Rufus C. Burleson Society merged with the Erisophian Society, following in the footsteps of the Philomathesian and Calliopean societies who merged as brother-sister organizations. Retaining the Erisophian name, the Rufus C. Burleson Society hosted its last meeting in 1925. After a brief attempt at revitalization in 1926, the group officially dissolved in 1926.