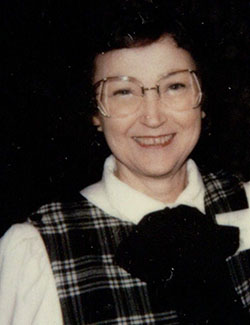 Anita Ward Rolf, the daughter of Mayfield and Norvia Ward, was born in Birmingham, Alabama, on May 27, 1930. Rolf earned her bachelor's degree from Alabama College (now the University of Alabama) and her master's degree from Southwestern Baptist Theological Seminary in Fort Worth, Texas. She then moved to Miami, Florida, where she worked two years as the youth director for First Baptist Church of Miami. Afterward, Rolf relocated to Nashville, Tennessee, where she became the Director of Student Activities at the Baptist Hospital School of Nursing, a position she held for four years.

During her time in Nashville, Anita met Howard L. Rolf, a Ph.D. student attending Vanderbilt University. The couple married in 1961 and later had four children: Jim, Jennifer, Stephanie, and Rhonda. In 1964, when Howard was hired as a professor for the Mathematics Department at Baylor University, the Rolf family moved to Waco, Texas.

Once in Waco, Rolf became involved in several local organizations. She was active in the First Baptist Church of Waco, serving as a teacher and mentor for youth and college-age adults. She also acted as a deacon and board member for the First Baptist Foundation. At Baylor, Rolf was heavily involved in the Baylor Round Table, fulfilling the duties of the president in the 1986-1987 academic year. In the broader community, Rolf served on the board of Midway School for seventeen years and volunteered with United Way and McLennan County Historical Association. Rolf passed away on December 30, 2014, and is buried in Oakwood Cemetery.

More information about Anita Ward Rolf can be found at the Institute for Oral History.