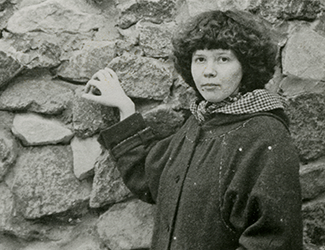 For the Cry from the Well

"I Will Dream of You, Russia.
In the Accursedness of Your Victories.
In the Anguish of Your Impotence.
In the Nausea of your hangover--
Why Will Fear Break Through?
All Has Been Mourned, All Have Been Sung to Rest--
Who Will You Flinch from All of a Sudden?
Though You'll Deny It, Take Refuge in Illusion,
Put All the Blame on Those Who Have Been Killed,
I Will Still Come and Stand Before You
And Look into Your Eyes."

Irina Ratushinskaya was born without a motherland. Her family of gentrified Poles strongly supported Polish independence. Irina's great grandfather had been killed in one of the many Polish uprisings against Russia. Eventually, her grandparents were forced to leave Poland. They settled in Odesa, Ukraine, where Irina was born on March 4, 1954.

A mischievous child, Irina’s parents constantly tried to tame her free spirit and raise her in the conventional Soviet fashion. They enrolled her in Young Pioneers, the Communist youth organization. Despite living in Ukraine, she was only permitted to speak Russian. Irina's parents were atheists and forbade her grandparents to take her to the Polish Roman Catholic Church. They did not allow Irina's grandmother to teach her Polish. Her parents' efforts left Irina disenfranchised and not truly Russian, Polish, or Ukrainian. Irina would later write that this forced Russification of her childhood left her without a motherland and "broke the last threads which connected me to my family's past."

In her teenage years, Irina demonstrated an aptitude for poetry and was an avid reader. She first confronted Communism at the University of Odessa where Communist ideology effectively permeated the humanities, and students became little more than expert propaganda writers. Therefore, the young woman joined the physics department to study natural science. Her discreet decision marked one of her first acts of outward defiance towards Soviet policy.

Irina enjoyed the university experience, but she gradually devoted more of her leisure time to writing, particularly poetry. The KGB actively recruited her as early as 1972 when she refused to be an informer. Irina graduated in 1976, and the KGB contacted her again and asked her to be on the school's examination committee for entering candidates. They wanted her to identify Jewish applicants and deliberately score them lower. Her refusal led her to be demoted and eventually forced out of her job. The KGB made employment difficult, so she began cleaning apartments and repairing small appliances.

In 1979, she married Igor Gerashchenko and moved to Kiev. Irina and Igor repeatedly applied for passports to live abroad. Irina believed this was the only way she could obtain employment as a physicist. However, the couple's application was denied. Frustrated, Irina increasingly turned to stubbornly honest poetry. Her university friend Ilya Nykin later wrote, "She wouldn't relinquish this honesty even when writing about her country."

Although not political in nature, her poems were a weapon in the fight for human expression. They began to appear in underground newspapers. When the KGB obtained one of these periodicals, Irina Ratushinskaya was on a collision course with the government. On September 17, 1982, she was arrested on charges of "agitation carried on for subverting or weakening the Soviet regime." She was sentenced six months later to seven years in a prison camp followed by five years of internal exile. A day after she turned 29, Irina was deported to Barashevo, a "strict regime" camp outside of Moscow.

Ratushinskaya served four years but was released in October 1986, as a sign of good faith before the Reagan-Gorbachev Summit in Iceland. She had spent nearly a year in solitary confinement and survived countless freezing nights, beatings, and hunger strikes in defense of human rights. Prison severely depleted her health. After her release, Irina was permitted to travel to England for medical treatment. She arrived there as a celebrity. Irina's poetry and dedication to human rights had gained the attention of the West. Her poems had been smuggled out of prison on rolled-up cigarette paper and were widely read in internationally circulated Samizdat journals and collectively published under the title No, I'm Not Afraid. Eventually, her popularity afforded an offer to become Northwestern University's Poet-in-Residence. When she moved to the United States, the Soviet government revoked her citizenship.

Irina and Igor had twin boys in 1993 and longed to raise them in Russia. Finally, in 1998 her Russian citizenship was restored, and the family settled in Moscow. Irina lived a comfortable life, dying at age 63 in July 2017 from cancer. By then the world had largely forgotten her tremendous sacrifice. However, she still lives as the poet warrior who dared to stand before the Soviet authorities, look into their eyes, and refuse to back down.

More information about Irina Ratushinskaya can be found in the Keston Center for Religion, Politics, and Society.

Grey is the Colour of Hope
No, I'm Not Afraid
Pencil Letter