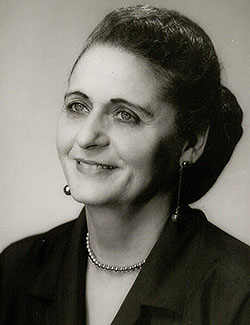 Garcenina (Tina) Margarita Piazza was born in Mussomuli, Sicily, on March 10, 1903. Shortly thereafter, in 1906, her family moved to Waco, Texas. Although they attended a Catholic church in Waco, Piazza would sneak over to the nearby Baptist church across from their home to attend Sunday School. She discovered her love for singing through the hymns she learned there and continued to develop her voice by singing at the Waco Rotary Club, the Kiwanis organization, the Lion's Club, and alongside the silent-film-theater orchestra at the Hippodrome. After graduating high school in 1920, Piazza studied for four years at the Euterpean Club, where she took lessons from Baylor University professors in piano, voice, violin, sight-reading, sight-singing, and French.

Piazza moved to New York City in 1925 and enrolled at the Juilliard School of Music. After she graduated from Juilliard in 1929, she was hired to sing in multiple operas throughout New York City, including the New York Opera Comique. She took dancing and acting lessons and studied with opera coaches during this time. In 1937, she travelled to Pesaro, Italy where she and a young man named Stanley Jones took voice lessons from Arturo Melocchi, a renowned voice teacher. The three developed close friendships, and Piazza studied with Melocchi until 1940 when she and Stanley Jones married.

Jones developed cancer soon after their marriage and passed away in 1944. Piazza worked in a hospital while her husband was ill and was involved in many clinics, including hematology, pulmonary, and premature baby research.

Piazza returned to Waco in 1951 and started teaching at Baylor University in 1954. Piazza desired to become a more effective teacher, so in 1957, she visited her former teacher, Arturo Melocchi, in Pesaro and studied his teaching methods. She came back to Baylor a few months later and resumed her teaching. Following her retirement, she gave voice lessons in her Waco home. Piazza passed away on January 28, 1978.

More information about Garcenina (Tina) Margarita Piazza can be found at the Institute for Oral History.