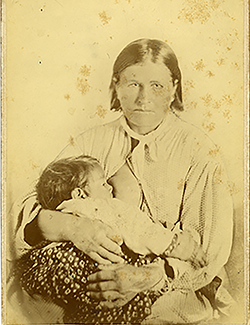 Cynthia Ann Parker, born circa 1825, came to Texas with other members of her family in 1833. They settled near Groesbeck, Texas, building a wooden fort and farming the surrounding land. In 1836, Parker's Fort was attacked by a Native American force of several hundred warriors, long understood by eyewitnesses to be predominantly Comanche. Five Parker family members were killed and five others were captured in the attack, including Cynthia Ann Parker. Just twelve or thirteen when taken captive, she was adopted into the tribe and became thoroughly Comanche. She became the wife of Peta Nocona, a noted leader in the Naconi band of the Comanche. They had three children, two boys and a girl: Quanah, Pecos, and Topsannah. Peta Nocona was probably killed in the Battle of the Pease River in 1860. Parker was captured by Texas Rangers in this battle and was identified as the Cynthia Ann Parker who had been with the Comanche for almost 25 years. Though she returned to Texan society, Parker never recovered from her capture and made several attempts to escape back to her life on the plains. She died in 1870, and was originally buried in Fosterville Cemetery, Anderson County, but was reinterred in the Post Oak Mission Cemetery near Cache, Oklahoma, in 1910. Parker was reburied a final time in 1957 in the Fort Sill Post Cemetery, Lawton, Oklahoma. While Baylor University does not own any documents originally written by Cynthia Ann Parker, there are quite a number of collections at The Texas Collection that document her life.

More information about Cynthia Ann Parker can be found in the Jack and Gloria Parker Selden collection at The Texas Collection.

"Documenting the Parker Family Story at The Texas Collection, Part 1"

"Documenting the Parker Family Story at The Texas Collection, Part 2"

"Documenting the Parker Family Story at The Texas Collection, Part 3"