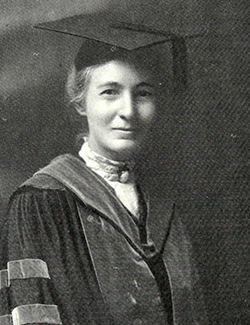 Dr. Lula Pace was born in Mississippi in 1868, but her family moved to Central Texas soon afterwards. She attended Baylor Female College in Belton and graduated with a B.S. in 1890. She taught in the Temple area during the school year and worked on her master's degree at the University of Chicago during the summers. Pace earned her M.A. in 1902, and Baylor University hired her as an Assistant Professor of Biology the next year. At the time, she was one of only five female professors on Baylor's campus. She continued to take classes at the University of Chicago and completed her Ph.D. in 1907, becoming the first female professor at Baylor to hold a doctoral degree. The same year, she became the chair of the Department of Botany and Geology, a position she held until her death. Her classes were popular with students, particularly because of the various field trips she took. During her time at Baylor, Pace faced criticism from fundamentalists like J. Frank Norris for teaching evolution but received support from the Waco community and Baylor President Samuel Palmer Brooks. Dr. Lula Pace died in Waco in 1925.

More information about Lula Pace can be found in the Lula Pace collection at The Texas Collection.