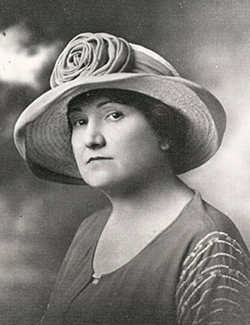 Gussie Oscar, the daughter of German immigrant Rudolph Oscar and Ella Lavine, was born and raised in Calvert, Texas. The Oscars built and owned the Casimir's Opera House and Grand Hotel in Calvert, a foreshadowing of the life Gussie would pursue.

Although the Oscars were Jewish, Gussie was educated in an Austin convent where she studied music. She subsequently moved to Waco and played piano for the Majestic Theater. Despite being in a male-dominated field at the time, Oscar excelled in the musical and theatrical arenas. She conducted the first all-female orchestra in Waco before being named the manager of the Auditorium Theater in 1915. At times, Oscar struggled with the local censor board and was arrested twice for opening the theater on a Sunday. Due to Oscar’s arrests and some closures forced by the city, touring companies began boycotting shows in Waco. The Auditorium closed in 1928.

Not to be dismayed, Oscar continued booking programs at the Town Hall, Waco Hall, and the Cotton Palace Coliseum. Over the course of her career, she was responsible for bringing many national celebrities to Waco including Eleanor Roosevelt, Will Rogers, William Jennings Bryan, Harry Houdini, the Marx Brothers, John Philip Sousa, Anna Pavlova, and Geraldine Ferrar. Oscar passed away on February 7, 1950, and is buried in the Hebrew Rest Cemetery in Waco.

Wallace, Patricia Ward. A Spirit So Rare: A History of the Women of Waco. Austin, TX: Nortex Press, 1984.