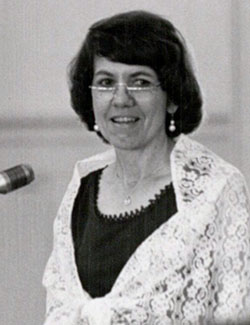 Alice June Williams Osborne, the daughter of Baptist minister Luther Wise Williams and Lucile Sims Williams, was born in Marvell, Arkansas on June 7, 1931. She graduated from Eldorado High School in 1949 and earned her undergraduate degree from Ouachita Baptist College in 1953. On February 15, 1953, she married Harold Osborne, a fellow alum of Ouachita Baptist College and a long-tenured Baylor University sociology professor. The couple had three sons: Mike, Van, and Sam.

Upon the Osbornes' arrival at Baylor University in 1958, June joined the Baylor Round Table. She remained active in the group for several years and served as the organization’s president during the 1966-1967 academic year.

After discovering her passion for bird-watching, Osborne became a renowned ornithologist and wrote several articles and books on the topic. She penned a column entitled "Wingin' It" for the Waco Citizen and later for the Waco Tribune-Herald and contributed birding articles to the Baylor Line, Wild Bird Magazine, and Bird Watcher's Digest. She also authored four books: Birder's Guide to Concan, Texas (1991), The Cardinal (1992), The Ruby-Throated Hummingbird (1998), and I'd Rather Be Birding (2004). In addition to her writing career, Osborne also taught courses for Baylor's School of Continuing Education and McLennan Community College, conducted bird-watching tours, and communicated basic principles of ornithology to senior citizens through Baylor University's Elderhostel program. She passed away on August 15, 2007.