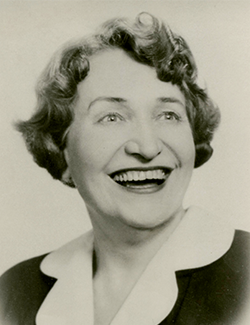 Born in Waco on November 21, 1894, Esse Forrester O'Brien attended Waco High School and received a fine arts diploma from Baylor University in 1913. She completed some postgraduate work in art at both Baylor and the Arts Student League in New York City under George Bridgman. In 1917, she married John L. O'Brien and they had one son. O'Brien continued studying art until she had to give it up due to paint poisoning, at which point she began to write about art and compose poetry. She earned a B.A. from Baylor in 1934 and published her first work, Art and Artists of Texas, the following year. O'Brien was the first author to attempt a systematic survey of art in Texas during the 19th and 20th centuries. She also wrote several children's books and lectured on writing for a juvenile audience at Texas colleges. Her writing won numerous awards and she was a member of multiple organizations including the Poetry Society of Texas and the Texas Folklore Society. O'Brien passed away on May 21, 1975, near Waco.