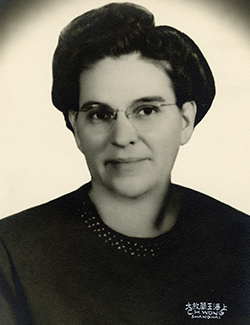 Mary Frances Hodges Nichols was born in Junction, Texas, on October 13, 1902. In 1928, while working in Austin as a teacher, she met Buford Nichols just after his ordination as a Baptist minister. The couple married on February 15, 1931.

By 1937 the couple, now with two children, Buford Lee Jr, and John, were appointed by the Southern Baptist Foreign Mission Board to become missionaries in China. The couple left for Shanghai that same year. Buford and Mary Frances went to Peking and spend their time learning the language. By 1939, the family moved to the interior city of Kaifeng. Due to the dangers of World War II, the family separated in 1940, with Buford remaining in China until 1941, while Mary Frances took the family back to the states. After Buford's return, the family moved to Ft. Worth, where the couple had their third child, David. The family separated once again in 1943 when Buford decided to return to China to assist Baptist missionaries in the area of “Free China,” where the Chinese government had retreated from the Japanese invasion. There, Buford worked for the Chinese Nationalist Government, becoming close friends with Generalissimo Chiang Kai-Shek and his wife. Mary Frances and the children, however, remained in Junction and San Marcos, Texas. Buford returned to America in 1945, and the whole family then moved back to China, arriving in Shanghai on the last day of 1946. There, Buford and Mary Frances assisted the local seminary and preached at the Old North Gate First Baptist Church of Shanghai. The family left China to escape Communist pressures in July 1950, returning to Waco, Texas. There, while Buford taught at Baylor University, the family was asked to return to the mission field, this time to Indonesia.

Buford and Mary Frances arrived in Jakarta, Java, Indonesia on November 14, 1952, and then moved to the city of Bandung for language studies. There, they assisted in organizing Baptist churches and preaching. Later, in October 1954, the couple helped found a Baptist seminary in the Javanese city of Semarang, later known as the Seminari Theologia Baptis di Indonesia. Buford and Mary Frances continued to preach and teach in Indonesia, and witnessed the political turmoil that engulfed the nation in the late 1950’s and early 1960’s. They continued their missionary work until 1970’s, when the family was instructed by the Foreign Mission Board to return from the field. Before returning to the United States, however, the family worked in two more missions; first in the South American nation of Surinam from 1972-1973, and in Macao from 1973-1975.

Finally, after close to forty years as missionaries, the family returned to Waco, Texas, in 1975. They moved one last time to Houston in 1976, where the couple lived until their deaths, with Mary Frances passing away on July 1, 1982, and Buford on June 29, 1990.