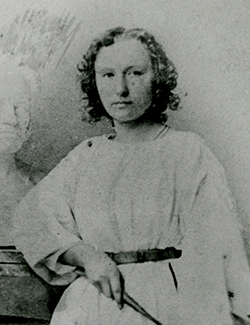 Elisabet Ney was born on November 26, 1833, in Westphalia (present-day Germany). She moved to Berlin at the age of 17 to study art, a rare occurrence for a young woman at that time. She later relocated to Munich to continue her art education under a famous sculptor, Christian Rauch. Ney gained a reputation as a well-known sculptor in her own right by creating busts of influential military, political, and intellectual figures from across Europe. In 1863, she married Edmund Montgomery, but continued to use her maiden name for the rest of her life. The couple had two children, only one of whom lived to adulthood. The family moved to the United States in 1870 and eventually settled near Hempstead, Texas. She sculpted the statues of Stephen F. Austin and Sam Houston that are now on display at the Texas State Capitol. Ney also carved a statue of Albert Sidney Johnston and busts of several governors. Following her death on June 29, 1907, the Texas Fine Arts Association was established in Ney's honor. Her studio in Austin remains intact today, serving as a museum for her artwork.

More information about Elisabet Ney can be found in the Ney-Montgomery papers at The Texas Collection.