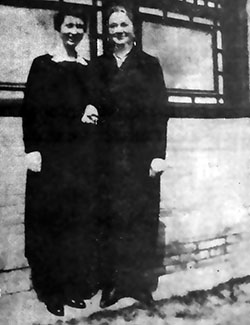 Born February 8, 1897, Katie Murray was a native of North Carolina. She graduated from the Women’s Missionary Union Training School in Louisville, Kentucky, and served as a Southern Baptist missionary to China and Taiwan from 1922 until her retirement in 1962. Murray provided relief aid to refugees during the Sino-Japanese War and had to flee the country several times due to conflicts. Her papers contain extensive information about her work as a missionary and the reception of Christianity by the Chinese people. They also document the obstacles she faced in the aftermath of World War II and the Communist takeover of the country. Murray served her last few years in Taiwan before returning to the United States. She died on October 22, 1982, and is buried in Rose Hill Cemetery in North Carolina.

Wu, Xiaoxin, ed. Christianity in China: A Scholars Guide to Resources in the Libraries and Archives of the United States. 2nd ed. New York: Routledge, 2017.