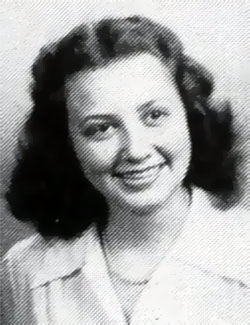 Doris Wade Cummins Moody was born on March 7, 1928, in Fort Worth, Texas. She enrolled at Baylor University in the fall of 1945 and was a participant in the student-led revival movement which started in the spring of 1946. She joined the Baptist Student Union (BSU) her freshman year and became the chairman-elect her sophomore year. One of the main preachers at the revival was Jess C. Moody, whom she later married. Many local pastors were supportive of the revival, and most Baylor students participated in or attended the revival services. Doris Moody worked all four years of school in the Burleson Dining Hall and served many of President Pat Neff's meals.

The summer after Moody's freshman year (1946), Baylor students organized citywide revivals all over Texas. Moody served as the co-chairman of publicity for the revival in Fort Worth and participated in twelve other revivals that summer. During the summer of 1947, she was a member of a youth revival team and acted as a seminar leader and fellowship director. During the school year, Doris Moody worked on The Shield magazine at Baylor. She was also an assistant editor for a radio program called "Where He Leads" that was broadcast from Waco Hall.

Moody graduated in 1949, returned to Baylor University in the early 1950s with her husband, and commenced work on her master's degree in sociology. After their time at Baylor, the Moodys began pastoring a church as well as writing and producing Christian television programs.

As of 1982, Moody had been a pastor's wife for 33 years in 3 different churches across the country, working with young people, single adults, and married couples. She taught a large Bible class in California, started a single adult ministry at their church in Florida, and created a youth program for a church in Kentucky. She and her husband also established Palm Beach Atlantic College in 1968 while they lived in southern Florida. Moody passed away on February 12, 2013.

More information about Doris Wade Cummins Moody can be found at the Institute for Oral History.