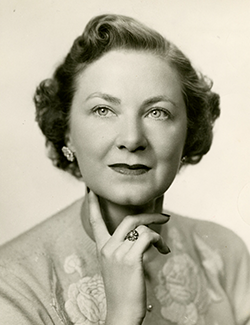 Born on June 11, 1912, Ruth Shick Montgomery moved with her family to Waco, Texas, in 1929. She received her first job as a reporter with the Waco News-Tribune as part of a school project and later attended Baylor University from 1930-1933; however, she transferred to Purdue after her father was relocated during the Depression and graduated in 1934. She married a businessman, Robert H. Montgomery, from Detroit in 1935 and worked for several newspapers before becoming the Washington correspondent for the New York Daily News. Montgomery quickly became a prominent writer and syndicated columnist and was the only female reporter to cover Franklin D. Roosevelt's funeral. Her political reporting took her around the world.

In 1962, she focused on writing novels rather than reporting. Montgomery published three books about the time she spent in Washington D.C. working with various presidents. She also published 11 books on the supernatural and New Age movement, including her bestselling biography, A Gift of Prophecy, of known spirit medium Jeane Dixon. Ruth passed away on June 10, 2001, in Naples, Florida.